Maintenance team mixed up BA jets before A319 cowl loss

Investigation into an engine-cowl loss on a British Airways Airbus A319 has found the cowl was left unlatched by technicians who inadvertently mixed up the aircraft with another Airbus during overnight maintenance at London Heathrow.

The technicians opened the cowls on the A319’s engines to carry out oil servicing of the integrated drive generator. But they did not have the necessary oil pump to complete the work, and left the cowls closed but unlatched while they moved on to inspect other aircraft and fetch the pump.

When they returned to the A319, some 3h later, they inadvertently drove past the aircraft – which was on stand 513 – and instead pulled up next to an A321 parked four stands further along.

Despite noticing that the A321’s cowls were shut and latched, and despite finding that its oil level did not need servicing, the technicians failed to realise that they were dealing with a completely different aircraft. 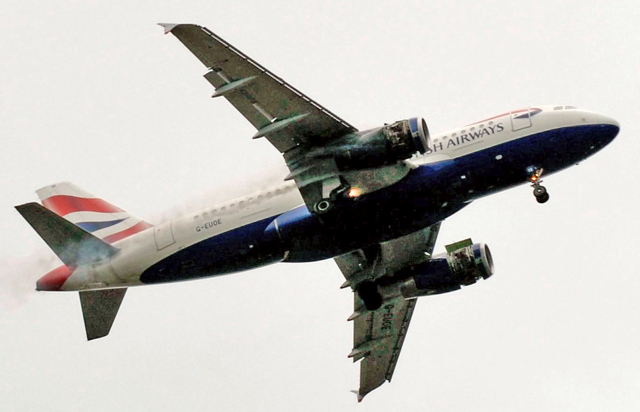 The UK Air Accidents Investigation Branch says the pair did not check the aircraft registrations, and simply reasoned that a third party had closed the cowls in their absence.

Both the A321 (G-EUXI) and the A319 (G-EUOE) were part of a group of six aircraft assigned to the two technicians. All six were to undergo daily checks but the A321 and A319 were also due to have weekly checks.

Although the A321 is physically larger than the A319, the prevalence of single-aisle Airbuses in BA’s fleet, carrying the same livery and parked at similar-looking stands, could lead to visual confusion, it states.

Fatigue might also have played a role, it adds, because the technicians made their return visit at 01:30, a low point in the circadian rhythm.

BA’s maintenance division had previously encountered instances of “aircraft swap errors”, the investigators found, although these typically involved technicians attending the correct stand at which the wrong aircraft had been parked.

Misidentification errors were “relatively common”, says the inquiry, although the consequences were usually “benign”. But the absence of formal recording, it points out, meant that “no mitigating actions” had been taken.

Although the cowl doors were subsequently closed correctly on the A321, the mix-up meant that the A319 was not revisited.

Its doors had neither been propped fully open, nor closed and latched, which made the pilots’ task of visually detecting the oversight more difficult during the following morning’s pre-flight walk-round.

As a result the A319’s unlatched cowls went undiscovered and they were subsequently torn from the aircraft’s engines as it departed for Oslo on 24 May 2013.

Damage from the cowl loss caused a fuel leak and fire in the starboard powerplant, which was shut down in flight. The aircraft returned to Heathrow and landed safely, with no injuries among the 80 occupants.