Messier-Dowty has been confirmed as supplier of the main landing gear for the Airbus A350 XWB. The Safran Group company had been selected to supply the main gear for the original A350, but the XWB has a completely new design.

The company says it will be responsible for the design, development, qualification testing, manufacturing and in-service support of the main gear, with deliveries to the Airbus final-assembly line in Toulouse scheduled to begin early in 2011. 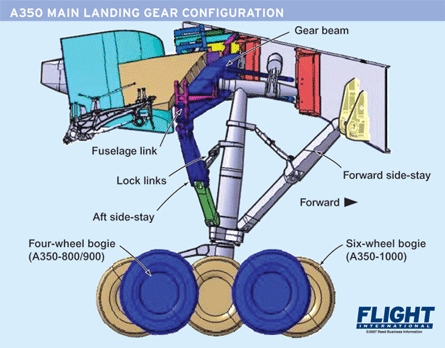 Airbus changed the A350 main-gear design after switching to a composite wing structure. To reduce loads imposed on the wing, each gear leg attaches at its forward point to the rear wing spar and at its aft point to a gear beam that is itself attached to the wing and fuselage.

Dual, forward and aft, side stays attached to the rear spar and gear beam brace the gear leg. The A350-800 and -900 both have four-wheel bogies while the larger -1000 has six-wheel bogies to reduce pavement loading.

Messier-Dowty says its main-gear design includes increased use of titanium for weight savings and corrosion resistance, as well as chrome- and cadmium-free surface treatments.