Canberra has decided to go with a sole-source acquisition to fill an unmanned air vehicle (UAV) requirement for the Royal Australian Navy (RAN). 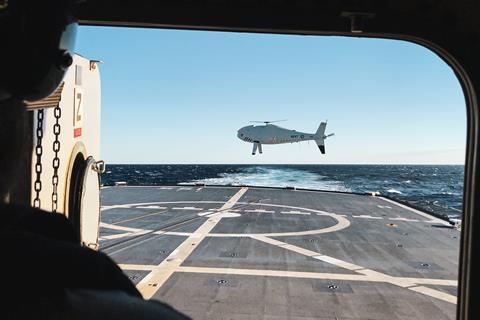 “Schiebel Pacific welcomes the decision of the Commonwealth of Australia to speed up the provision of its [unmanned air system] capability by initiating a single source acquisition of the Camcopter S-100,” says Schiebel.

“This will enable the [RAN] to accelerate the capability acquisition they need and together with our local partners, we are committed to deliver the best UAS solution for the Royal Australian Navy.”

According to the Australian Defence Business Review, five teams were shortlisted in March 2021: Raytheon/Schiebel with the Camcopter S-100; Textron Australia with the Aerosonde MK4.7/HQ; Northrop Grumman and Leonardo with the AWHero; Insitu Pacific with the ScanEagle/Integrator; and BAE Systems Australia with an unspecified platform.

The Camcopter S-100 is already deployed aboard Australian navy warships. Schiebel adds that the programme will support 100 new jobs in Australia, where “design, development, manufacture, integration, and support” will be undertaken.

In 2017, the Camcopter S-100 won an Australian navy contract for an unspecified number of airframes. The package included three years of follow-on support.

The award also sees the Camcopter S-100 beat the UMS Skeldar, which was also down-selected for the requirement in May 2016.