Embraer and the Brazilian air force have signed a memorandum of understanding to jointly study the design and development of an “advanced unmanned aircraft system”.

Few details about the unmanned air vehicle (UAV) were revealed by Embraer in its announcement on 23 April. However, the company distributed a rendering, for “illustrated purposes only”, of a stealthy UAV with short swept wings, perhaps indicating a combat role. 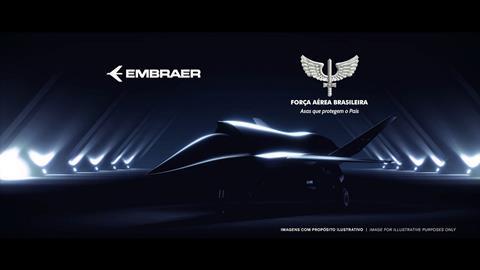 “This is a unique opportunity for the Brazilian air force to deepen its studies in disruptive technologies that may cause an imbalance in current and future scenarios,” says Brazilian air force commander, Lieutenant-Brigadier Carlos de Almeida Baptista Junior. “In modern war, it is essential to use unmanned aerial platforms, operating alone or in conjunction with conventional aircraft. Such technology makes it possible to reduce costs and risks, without losing effectiveness in fulfilling the missions assigned to the Brazilian air force.”

If Brazil does intend to develop a UAV for combat operations, it would join a growing number of countries, such as Australia, China, India, Russia, the UK and the USA, building unmanned aircraft for air-to-surface and air-to-air attack roles. These air forces envision combat UAVs flying solo, in swarms or in concert with manned jets as so-called loyal wingmen.

“This study is of fundamental importance for the maintenance and expansion of Embraer’s competencies in the development of aerial defence systems with high technological content and great integration complexity,” says Jackson Schneider, chief executive of Embraer Defense & Security. “It is also an opportunity for the continuous development of new technologies and products for the [Brazilian air force] and the Ministry of Defence, aimed at expanding the operational capacity and guaranteeing national sovereignty.

“A major challenge for this aerial system will certainly be its integration and joint operation with other systems and aircraft, manned or unmanned,” Schneider adds.

While national champion Embraer manufactures civilian airliners, military light attack aircraft and military cargo transports, the company does not produce an advanced combat aircraft. Brasilia in recent years has taken steps to increase local knowledge of building combat aircraft via a deal to buy 36 examples of the Saab Gripen E/F, renamed the F-39E/F, for its air force.

The F-39E/F acquisition deal includes an in-country production programme for 15 examples of the fighter. The rest of the fleet is to be built in Sweden. The agreement also includes a technology transfer agreement to train more than 350 Brazilian engineers and technicians in Sweden on the fighter’s manufacturing.