General Atomics, Leonardo to work on Seaspray integration with MQ-9B 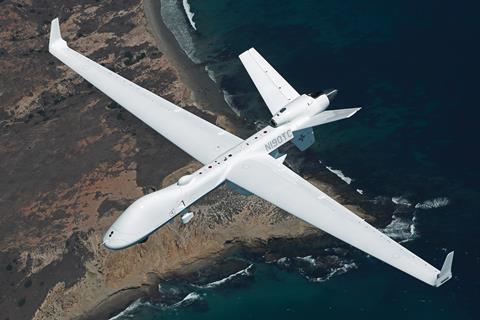 “The Seaspray greatly enhances the capabilities of the MQ-9B and builds on the already close working partnership between GA-ASI and Leonardo,” the US company says. “Earlier this year GA-ASI announced the completion of initial integration work of Leonardo’s Sage electronic surveillance unit onto the SeaGuardian, equipping the aircraft with the ability to gather intelligence information on maritime and land-based radar emitters over a wide area.”

The UK will be one customer of the Seaspray-equipped MQ-9B, with its Royal Air Force to introduce the type in the Protector RG1 configuration. Leonardo says the sensor will also be available to its international customer base.

The Leonardo news follows General Atomics’ 15 January announcement that it took less than three months to integrate the Legion pod with the Avenger, and move to a 90min captive carry test.

The Legion pod is an infrared search and track sensor that allows aerial targets to be detected and tracked in radar-denied environments.