The purpose of the flights is to show the US Army that the aircraft, when fitted with long-range radar and air-launched effects, can serve as a target spotter for the service’s next generation of tactical ballistic missiles, the Long Range Precision Fires system. The company plans for demonstration flights to continue throughout 2020, it says on 21 January. 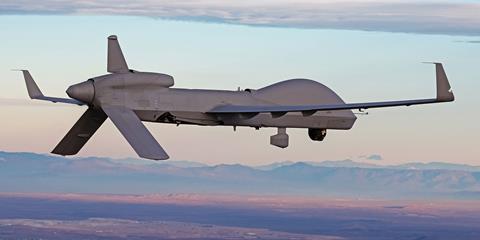 “Gray Eagle Extended Range is a critical tool, along with the Army’s manned platforms, for operations in an [multi-domain operations] environment,” says David Alexander, president of General Atomics Aeronautical Systems. “We’re excited to show the capability Gray Eagle Extended Range provides due to its increased endurance and range, with the addition of high technology readiness level long-range sensors and air-launched effects.”

As part of the demonstration flights, General Atomics aims to show the UAV’s ability to detect, identify, locate and report ground targets using its Lynx Block 30A long-range synthetic aperture radar. The Lynx Block 30A also has an inverse synthetic-aperture radar capability, which allows it to better detect ships on the water.

General Atomics is pitching the radar-equipped MQ-1C as useful for operations over land or sea in the Pacific Ocean and European theatres. The Pentagon is concerned about new longer-range missile and artillery developed by China and Russia. In response, it is developing its own longer-range weapons, such as the Long Range Precision Fires system.

General Atomics also wants to show the Grey Eagle Extended Range UAV as a launching platform for air-launched effects. Air launched effects are UAVs that are launched from a host aircraft and are used to extend that aircraft’s sight or weapons range.

The demonstration flights with the MQ-1C come after General Atomics told FlightGlobal in November that it is developing a new attritable jet-powered UAV, called the SparrowHawk. That UAV is intended to be air-launched from and air-recoverable by the US Air Force’s MQ-9 Reaper.