The space industry is working with the US Department of Defense to help better shape the broadband requirements of unmanned air vehicles in years to come, an industry executive has revealed.

UAVs are commonplace in many US military operations, but the full motion and high definition video capability that is continually required to be streamed from them means it continues to rely on commercial capabilities for satellite communications (SATCOM), Skot Butler, vice-president of satellite networks and space services at Intelsat General, says.

Butler identifies some trends that will help shape the USA’s UAV broadband requirements, including the decision the Department of Defense has made to continue operating in Ku-band for the next five years.

"On the current platforms, first of all they are going to stick with Ku-band largely, so that is really important for us, and it clarifies something that has been confused in the marketplace for the past few years,” he says.

The DoD considered moving all SATCOM to operate over the Wideband Global SATCOM (WGS) constellation at one point, but has decided to put this on the back burner until 2019.

“It turned out that the WGS constellation is either full or unavailable, or just doesn’t support the concept of operations right,” Butler says. “Also, nobody has any money to go in and replace all the terminals they have with Ka-band terminals, so the primary UAV platforms that we support – Predator, Reaper and Global Hawk – are all going to stay Ku." 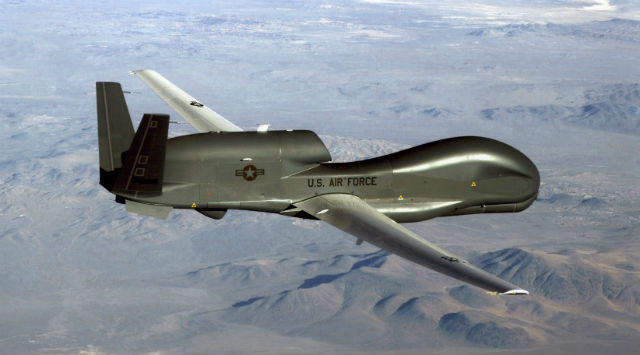 “We’re hearing the air force say as far as they can say into their planning horizon, no decision would be made before 2019, so that’s good.”

Butler adds that there is more requirement for higher throughput data rates, and Intelsat’s next generation Epic NG satellites are going to be able to offer options that will not require new modems or terminals but will still receive the higher throughput rate.

As technology develops and SATCOM terminals reduce in size, smaller UAVs will be able to carry a wideband broadband capability, Butler says.

Furthermore, as the DoD moves out of Afghanistan and into new areas of operation, bandwidth capability is going to be required in what are currently undefined operational environments. As a result, Intelsat offers steerable beams so that they can be adapted to future theatres of operation and provide the same broadband coverage.

“What we’re trying to do is get them to be a more communicative partner in projecting what their aims will be, and also talking to them about future demands in throughput data rates and so on,” Butler says. “They have a roadmap for that and we can map that too in the projection of how many airframes they’re going to buy. But we do find that they don’t always know in which direction they are going.”

Butler says that demand is not an issue, but budgets are – in particular for airborne intelligence, surveillance and reconnaissance – so the DoD is further relying on commercial satellites.

“What does the DoD do long term for their wideband communications?” Butler asks. “It’s sounding more and more like they’re not going to build a bunch of dedicated systems, so the question now is how they engage effectively with the commercial industry to make sure that we have what they need, where and when they need it. So now they have until 2019 to work all of this out.”

The DoD can take advantage of the fact that the commercial industry is available and willing to help it consider what the future might look like in terms of dispersed capabilities, resiliency, payloads and helping inform decision-making, Butler adds.