The US Navy’s newest maritime surveillance unmanned air vehicle made its first cross-country ferry flight and landed safely on 18 September at NAS Patuxent River in Maryland.

The Northrop Grumman MQ-4C Triton high-altitude, long-endurance UAV flew 3,290nm (6,080km) in 11h from the company’s Palmdale facility in California to the site.

The flight marks a transition from initial safety flight testing to a process of validating Triton’s ability to perform operational missions over the ocean. The aircraft flew along the southern US border and crossed the Gulf of Mexico and Florida following a pre-approved instrument route. Operators then directed the Triton north along the Atlantic coast and up the Chesapeake Bay at altitudes above 50,000ft to avoid civilian air traffic, according to US Naval Air Systems Command (NAVAIR). 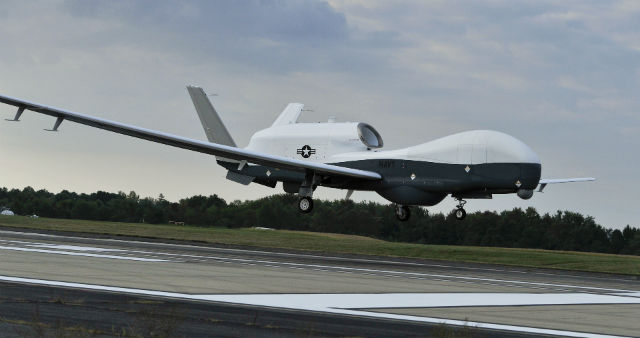 The cross-country flight was twice delayed because of weather issues.

“Today we brought Triton home to the centre of research, development, test and evaluation for naval aviation,” say Rear Adm Mat Winter, chief of the navy’s programme executive office for unmanned aviation and strike weapons. “The testing performed here over the next few years is critical to delivering a capability that will provide our warfighter an unparalleled awareness of the maritime environment in locations across the globe.”

A test fleet of three Tritons have completed 15 flights demonstrating speed and altitude capabilities prior to the inaugural trans-continental mission, NAVAIR says. Operations from Patuxent River will begin within weeks, where its sensors, communications and interoperability will be tested. The aircraft also will fly at an expanded envelope.

The three test vehicles are scheduled to fly a total of 2,000h before reaching initial operating capability, which is scheduled for 2017.

Triton, a version of the US Air Force’s RQ-4 Global Hawk, will be the navy’s largest UAV when it comes online. Both aircraft are powered by the Rolls-Royce AE 3007H turbofan engine.

The UAVs are designed to fly surveillance missions for up to 24h at altitudes of more than 60,000ft. The Triton’s advanced sensor suite, capable of detecting and classifying different ships, will be installed "this fall", according to R-R.