The US Congress was notified of the potential sale of the intelligence, surveillance and reconnaissance (ISR) aircraft, worth an estimated $600 million, the US Defense Security Cooperation Agency (DSCA) said on 3 November. The price estimate represents all of the possible options that could be bought by Taiwan. If Taipei decides to go through with the sale, the final package price will be lower after features are chosen and negotiations conclude. 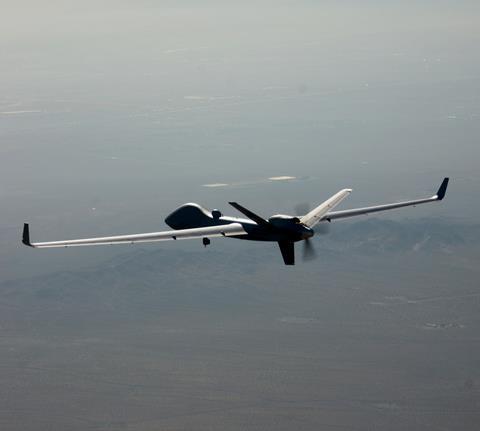 MQ-9B Protector, the Royal Air Force variant of the SkyGuardian

For several weeks various reports have said the approval of the UAVs to Taipei was imminent. China, which claims the island democracy as its own territory, has denounced previous arms sales by the USA and has threatened sanctions against participating companies.

Those sanctions have mostly remained symbolic. For instance, Beijing sanctioned the military side of Boeing, which does not do business in China, for the sale of 135 examples of the AGM-84H Standoff Land Attack Missile Expanded Response missiles to Taiwan. Its retaliations did not touch the commercial side of the company’s business, however.

Nonetheless, the sale of the MQ-9B UAVs will be seen by the ruling Chinese Communist Party as another escalation by the Trump administration, which has also approved the sale of an additional 66 Lockheed Martin F-16 fighters to Taiwan, among other weapons. In recent years, as Beijing has grown in military and economic strength, it has made an increasing number of threats to invade Taiwan.

What’s more, selling large UAVs to anyone but the closest allies of the USA is an extraordinary step because Washington previously had a policy of a “strong presumption of denial” to any other nation requesting the aircraft. That was because previously the UAVs were classified by the international Missile Technology Control Regime as cruise missiles that might be capable of delivering a weapon of mass destruction. In July, the Trump administration updated the US policy, allowing for a case-by-case approval of the sale of UAVs with maximum flight speeds less than 432kt (800km/h).

“If concluded, this would be the first time since our July 2020 update to the [UAV] export policy the US government invoked its national discretion on the implementation of the Missile Technology Control Regime’s ‘strong presumption of denial’, says a US Department of State official, who declined to speak on the record.

“Taiwan continues to expand its existing intelligence, surveillance and reconnaissance (ISR) infrastructure,” he says. “Adding the SeaGuardian platform will provide Taiwan with substantial new maritime surveillance capabilities. This is a crucial mission for the Taiwan navy, particularly given the PLA’s [People’s Liberation Army’s] aggressive incursions in regional waters and in the Taiwan Strait. We can expect Taiwan to further expand this capability in the coming years.”

“This proposed sale will improve the recipient’s capability to meet current and future threats by providing timely intelligence, surveillance and reconnaissance, target acquisition, and counter-land, counter-sea, and anti-submarine strike capabilities for its security and defence,” says the DSCA. “The capability is a deterrent to regional threats and will strengthen the recipient’s self-defence.”

While General Atomics’ UAVs are mostly intended for armed surveillance of areas where there are insurgencies or terrorist activity, over the past year military analysts have proposed using the aircraft’s long flight endurance as a means to keep a watch on sophisticated US rivals, such as China or Russia. With regard to Taiwan, it is thought that the MQ-9B’s 40h of flight endurance could allow it to watch China’s shores for any signs of an invasion preparation.