GECAS is forecasting that the Boeing 777-300ER freighter conversion programme launched with Israel Aerospace Industries (IAI) could secure more than 150 orders up to 2030.

GECAS is forecasting that the Boeing 777-300ER freighter conversion programme launched with Israel Aerospace Industries (IAI) could secure more than 150 orders up to 2030.

The IAI conversion programme was unveiled today by leasing giant GECAS, which has placed a launch order for 15 firm conversions with 15 options and is co-investor in the programme. The conversion is designated 777-300ER Special Freighter (SF) and is the first after-market cargo modification launched for the 777 family.

Boeing produces the new-build all-cargo 777F, which is based on the shorter-fuselage -200LR platform and has a list price of $352m. Total orders stand at 230 aircraft.

Cirium fleets data shows that there are 811 777-300ERs in service or temporary storage, with a further 33 on firm backlog for delivery before production is due to end next year. Greener sees the -300ERSF launch as providing a vital secondary-market application for the type and expects global demand for the conversion to be strong in the coming years.

“It’s a case of ‘build it and they will come’,” he says, forecasting an overall market for 350 new and used widebody freighters in the period to 2030. Of these, 200 will be for replacement and 150 for growth, he adds. GECAS believes the -300ERSF can capture 40-50% of the overall widebody market (ie up to 175 aircraft), with the remainder being taken by new-build freighters. 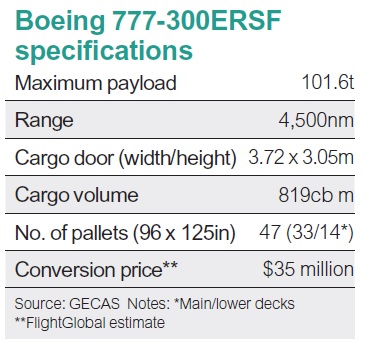 The -300ERSF’s maximum structural payload of 101.6t and greater volume than the 777F mean it is optimised for the lower cargo densities of the e-commerce and express operators rather than the traditional general freight operators like Cargolux and Nippon Cargo, which operate with densities of around 9-10lb/cb ft (0.11-0.13kg/cb m), says Greener. “But at the cargo density sweet spot of around 7.5-8lb/cu ft, the -300ERSF can carry 20t more than a 777F, at 50% of the cost.”

Greener adds that the -300ERSF’s payload range characteristics mean it can serve 95% of routes currently flown by the 747-400F.

GECAS, which has 30 -300ERs in its portfolio, is supplying the airframe for the prototype conversion. This aircraft, MSN 32789, is currently leased to Emirates, which is by far the largest -300ER operator, with 134 in service, according to Cirium fleets data.

The first aircraft will be delivered to IAI’s Tel Aviv facilities in December 2020 for conversion, with certification and service entry scheduled for late 2022. Once the line is up and running, conversion time will average four to five months per aircraft.

While the Tel Aviv facility will carry out initial conversions, lines are contemplated in other locations outside Israel from 2023. Talks are under way for additional contracts with other potential customers, including airlines and lessors. 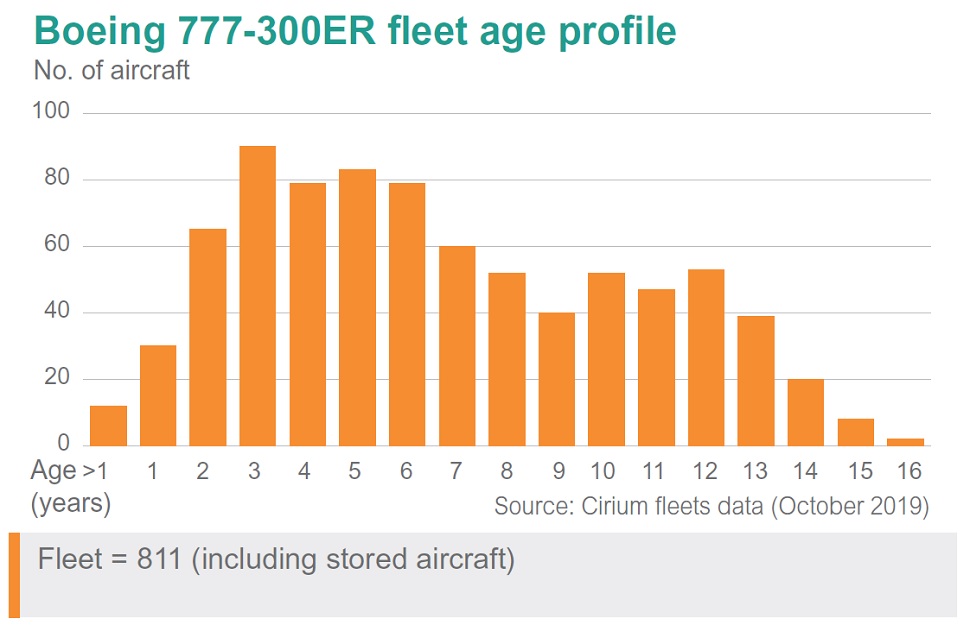 “We have identified 21 aircraft in our portfolio as conversion candidates,” says Greener.

He explains that the others are too young at the moment. “Traditionally, you would convert aircraft at around 15-16 years, but we may look at doing it a little bit earlier – ie between 12 and 16 years. And that’s mainly because the mission of this aircraft might be more international so will have high utilisation.”