Flybe Aviation Services had been working on the Royal Air Force’s Airbus Defence & Space A400M transports at the facility under a 2014 contract.

It stated at the time that it would mainly carry out base maintenance to support Airbus’s line servicing of the fleet. The RAF received its first A400M in November 2014.

Atlantic Aviation Group says the company has completed the acquisition of the operation, which will be known as AAG Defence Services and employ over 100 personnel.

“This acquisition will further enhance our capabilities to service clients in the UK and Europe,” says chief executive Shane O’Neill. 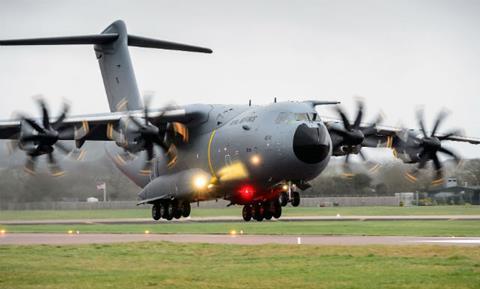 Atlantic Aviation Group has facilities in Shannon and counts Ryanair, TUI, Jet2 and several aircraft lessors among its customer base. It also serves as a maintenance training organisation with an established apprentice programme.

Its Shannon facility had previously been a maintenance station for Russian carrier Transaero before the airline’s collapse, and the operation was bought in 2015 by entrepreneur Patrick Jordan.