Lufthansa Technik’s international subsidiary is waiting for the South African Civil Aviation Authority (SACAA) to evaluate its proposals aimed at resolving the two outstanding findings raised in a recent audit which prompted the regulator to suspend its aircraft maintenance approval.

Lufthansa Technik Maintenance International (LTMI), the unit which handles maintenance for customers outside of Germany, was one of two MRO providers subject to an audit after an earlier probe into a “spate of occurrences” on Comair flights led to the latter’s temporary grounding. Comair has since restored operations after the suspension was lifted. 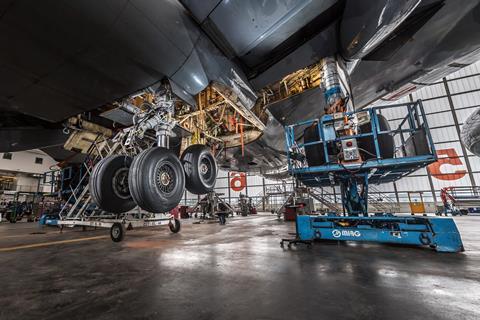 The audit into LTMI flagged four Level 1 findings, requiring immediate resolution. While LTMI was able to address two of these issues, a further two are stil to be resolved.

“Today, LTMI has submitted final resolution proposals for the two outstanding findings to the SACAA,”  says a Lufthansa Technik spokesperson. ”The company is now waiting for the decision of the authority if all findings are considered closed.”

SACAA initially suspended LTMI’s approval to carry out maintenance work in South Africa for Comair for 24 hours. This has now been extended to an indefinite suspension until the outstanding findings are addressed.

While the audit was launched following the earlier probe into Comair, the outstanding finding are not directly related to the technical problems that led to the temporary grounding of the South African carrier.