Budapest-based Aeroplex received the widebody hangar in March this year.

The company says the A330 freighter, which ICAO classifies as a Code E aircraft, arrived on 29 August to undergo C-check work at the 8,200m² facility.

Aeroplex says the hangar expands its capacity and capabilities and describes the A330 agreement as a “milestone” for the company. 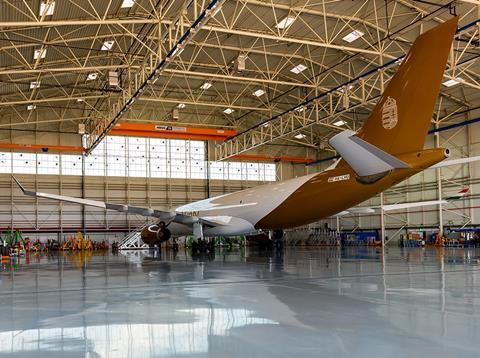 The twinjet (HA-LHU) is one of just 38 A330-200Fs in service and the Rolls-Royce Trent 700-powered aircraft was originally delivered to Qatar Airways in 2014.

“Handover of the new widebody hangar and the training of our specialists for a larger aircraft type than ever before took a long journey, which is the result of several years of persistent work,” says Aeroplex managing director Arpad Demeny.

“It is a historic moment and a serious step forward not only for Aeroplex, but also for the Hungarian aviation industry.”