Myanmar has proven to be a turbulent market for airlines but Myanmar Airlines International (MAI) is planning for better days ahead.

Moves towards more democratic rule in 2012 and an opening to foreign investment helped kick-start a rush of new airlines into the market, followed soon after by the failure of a number of carriers, and in inevitable consolidation.

MAI and its sister domestic carrier Air KBZ survived that period, and a slump in tourism that hit towards the end of 2018, and after shrinking are now planning to grow their combined fleet and network.

Tanes Kumar is commercial director at both carriers, having joined them during a management revamp in October 2018. He says that even though the number of airlines in the market has halved to around five, consolidation may not be over yet.

“Is there room for further consolidation? Personally, I think there is, simply because the current setup in Myanmar is quite sub-scale. We’re not able to compete with the foreign carriers,” he says.

Illustrating the scale problem, Cirium’s fleets data shows that Golden Myanmar Airways, Mann Yadanarpon Airlines and Yangon Airways all operate fleets of less than five aircraft each on their domestic services. Flag carrier Myanmar National Airlines is the exception, with a fleet of 18 aircraft that operate on domestic and international services.

All carriers in the market are facing issues common to the industry, such high operating costs and infrastructure constraints. Myanmar has also had the challenge of promoting itself as a tourist destination alongside neighbours with better developed infrastructure.

“Generally, just to sell Myanmar as a destination compared to Thailand, Vietnam or Cambodia is another challenge,” Kumar says.

Nonetheless, he believes that the market is showing signs of recovery from its 2018 slump, and that airlines like his will have to first “focus on markets that are driving the growth, before looking at expansion.”

For MAI, that involves adding to its fleet and growing its network to destinations in North Asia and India.

Cirium schedules data shows that the airline has a rather small international network, connecting Yangon to Bangkok, Guangzhou, Kolkata and Singapore. Domestically, it flies only to Mandalay, but codeshares on Air KBZ’s domestic network, connecting it topoints such as Bagan, Dawei, Heho, and capital city Nay Pyi Taw. 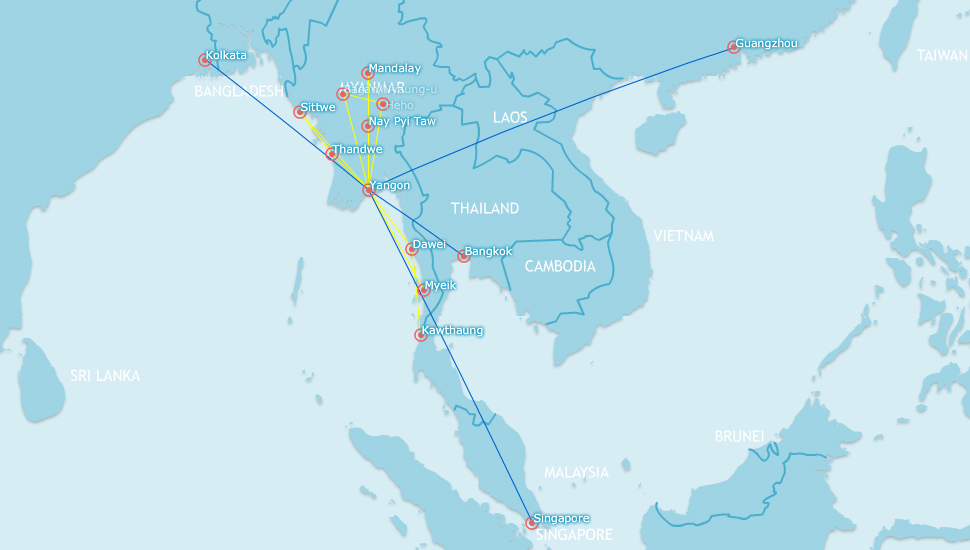 Kumar says the airline aims to grow its network from seven routes to 25. To meet that growth, the airline is planning to add one A319 and three A320s to its fleet of three A319s this year.

Part of the growth will come from operating more charter flights to China. MAI has started five charter services from Yangon and Mandalay this year to Fuzhou, Hangzhou, Hefei, and Nanchang.

“The model that works for Myanmar right now is charter. So we’re using charter as a backbone and we’ve got good partners, and we’re working with them to launch more cities [in China],” says Kumar.

“There are easily about 12 Chinese carriers flying into Myanmar. We’re losing the entire market because we’re not playing in that area or in that geographical market. We just want to make sure that we’re there.”

After Myanmar started political reforms in the early part of the decade, various foreign carriers have started services to the country’s commercial capital, Yangon. Cirium schedules show that the city is linked to Dubai, Doha, Seoul and Tokyo, as well as other cities in Asia.

Kumar also notes that major Southeast Asian carriers such as Singapore Airlines are deploying widebodies, while Bangkok Airways and Thai Airways International fly multiple frequencies to the city. Flights to Malaysia, meanwhile, are dominated by AirAsia, Malaysia Airlines and Malindo Air, and there are no Myanmarese operators flying to the country.

As the priority is to scale up its operations, MAI is not looking at acquiring widebodies over the next two to three years, or to add new codeshare partners. It now codeshares with Asiana Airlines, Garuda Indonesia, Korean Air, Malaysia Airlines, SriLankan Airlines and Royal Brunei Airlines.

Some expansion will come through MAI operating some domestic flights between Yangon, Mandalay and Nay Pyi Taw, which are capable of handling jet services.

That will involve greater levels of co-operation with Air KBZ. Moving forward, the longer-term goal for the two airlines is to operate as one company while maintaining their separate air operating certificates.

Like MAI, Air KBZ is looking to grow and modernise its fleet. Cirium fleets data shows that has nine ATR 72-600s and two older -500s. The latter are set to move out of the fleet and are being replaced by the -600s.

Having weathered the vagaries of the Myanmar market, Kumar is confident that MAI and Air KBZ are heading in the right direction.

“The outlook for Myanmar market as far as it as concerned, it has seen the lowest point which is the floor. It can’t go any lower and it can only go up,” he says.

“Where would we like to get to, maybe double digits in terms of fleet size both for MAI and Air KBZ. We don’t mind looking at 10 to 12 ATRs in two to three years time, and maybe eight to 12 aircraft [for MAI]. I can’t give an exact number now but that’s the aim.”