A de Havilland Canada DHC-6-300 Twin Otter operated by Nepal Airlines has crashed while attempting to land at the town of Jomsom, located northwest of Kathmandu.

The pilot and co-pilot suffered serious injuries in the crash and are in a critical condition, while the flight attendant suffered a broken leg, says a Nepal Tourism spokeswoman.

The aircraft, registration 9N-ABO, was operating on the 20min Pokhara-Jomsom route. 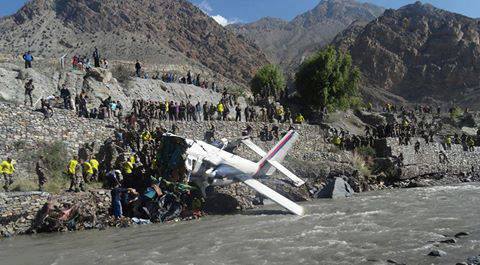 At 08:33 local time the aircraft touched down on the runway at Jomsom, but was seized by a sudden gust of wind and blown into the Kaligandaki River, which lies to the southeast of the runway. Conditions were clear at the time of the incident.

After being removed from the aircraft, the flight crew were evacuated to Pokhara on a aircraft operated by Tara Air. A helicopter was dispatched to pick up the tourists, said the spokeswoman.

Images on a Nepalese news site show that the aircraft came to rest on the bank of the river, and the fuselage was split in half forward of the wings.

Jomsom airport is located in the mountainous Annapurna Conservation Area, a popular destination for adventure tourists that includes some of the world's tallest peaks.