Las Vegas-based Allegiant Air has unveiled 28 new routes that will launch in the coming months, marking the biggest new service announcement in its history.

The carrier will face indirect competition on most of its new markets, with several other carriers already offering service via alternative airports.

Among Allegiant's three new destinations, Milwaukee has the most air service and is in line with the carrier's strategy of adding airports that are larger than what it traditionally flies to.

"Milwaukee is a big city we don't serve," Allegiant's senior vice-president of commercial Lukas Johnson tells FlightGlobal. The airline, which expects winter-heavy demand, is adding connections from Milwaukee to warm destinations in Florida and to Phoenix.

The addition of Norfolk in southern Virginia is likewise in response to demand for more service to Florida. Allegiant already flies from Richmond, which is just under a 2h drive from Norfolk. The airline plans to retain its Richmond flights to Orlando Sanford and St Pete-Clearwater.

Johnson says Norfolk and Richmond are on opposite sides of Newport News and that the airline sees demand for both. "You don't see as much cross traffic between the two airports." 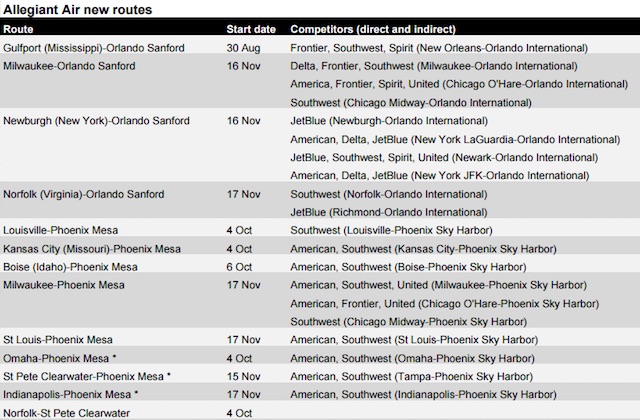 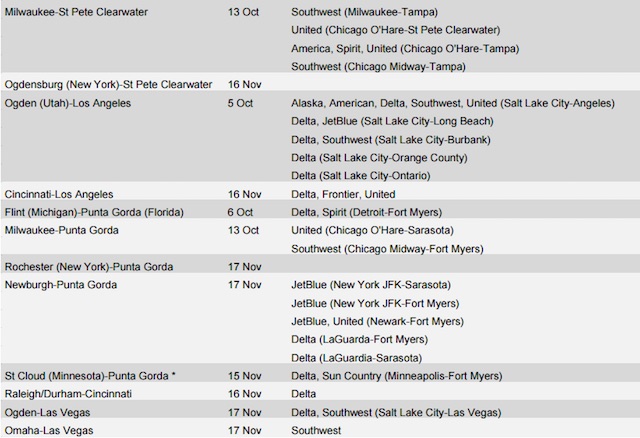 In line with Allegiant's business model, the carrier will operate up to twice weekly on most of its new routes, with the exception of Cincinnati-Los Angeles which it will fly four-times weekly.

The carrier will be the fourth airline offering nonstop service in the market, after Delta Air Lines, Frontier Airlines and United Airlines.

Cincinnati-Los Angeles is an anomaly in Allegiant's array of new routes, given that the airline typically launches markets with little or no direct competition. Johnson, however, justifies the service.

"Cincinnati is our largest originating market by a pretty significant margin," he says, pointing out that Los Angeles is a major destination that Allegiant doesn't serve from the city in Ohio.

Even with the new markets, Johnson estimates that Allegiant will face competition on only 20% of its routes. These include service to and from alternative airports, which Johnson defines as those within a 30min drive.