Allegiant to arrive in Louisville

Allegiant Air will launch service to Louisville (Kentucky) in May, continuing with its strategy to grow into mid-sized cities.

The Las Vegas-based carrier will begin flights on four year-round and two seasonal routes from the airport. It will be the only airline operating on all of the routes, although it will compete with American Airlines and Southwest Airlines indirectly on three of them.

Like many of Allegiant’s routes, most of the Louisville flights will serve sun destinations in the state of Florida.

Louisville will complement Allegiant’s existing service in the nearby airports of Cincinnati and Lexington, says the airline's vice-president of network and pricing Lukas Johnson.

“We have been successful with other cities in the region, and customers have been asking for service out of there,” he tells FlightGlobal.

Allegiant is “comfortable” with retaining its schedules in Cincinnati and Lexington, and plans to offer a Louisville schedule that will complement that at the two other airports, says Johnson.

Besides adding Louisville to its network, Allegiant plans to set up a seasonal base at Destin/Fort Walton in Florida, which the carrier launched service to in 2016. In May, it will begin 11 additional seasonal routes to Destin/Fort Walton.

“We’ve been happy with the region. It’s been a great destination,” says Johnson. Allegiant operates only one year-round route from Destin/Fort Walton, to Las Vegas. But the airline is considering converting some of the other seasonal markets to year-round service, says Johnson.

Allegiant will base two aircraft at Destin/Fort Walton while seasonal flights are operating, he adds. 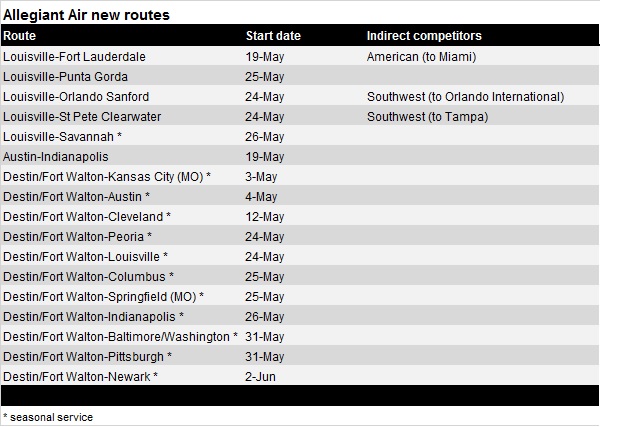