Las Vegas-based Allegiant Air has unveiled another wave of new routes, which will see the carrier adding three new points to its network in the coming months.

The ultra low-cost carrier will begin service to Sonoma County (California) In May, followed by Albuquerque (New Mexico) and Evansville (Indiana) in June.

Allegiant will start nonstop service from Albuquerque to both Austin and Las Vegas, and connect Sonoma County with Las Vegas and Phoenix Mesa. At Evansville, it will offer flights to Orlando Sanford.

The airline will also launch 17 other new routes connecting existing points in its network. Allegiant will operate twice weekly on all of the new routes with a mix of Airbus A320 family and Boeing MD-80 aircraft. 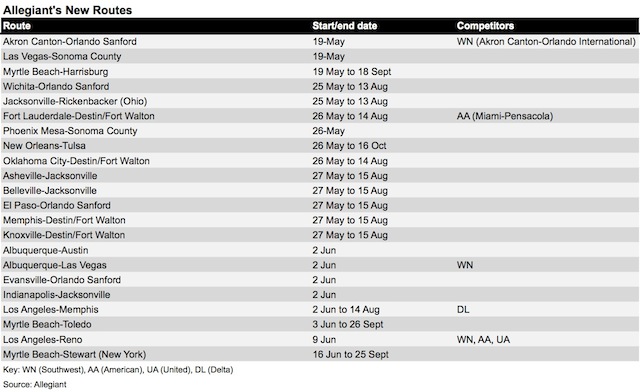 Allegiant will not face direct competition on most of its new routes, schedules in Innovata show. It will, however, compete directly against three airlines on service between Los Angeles and Reno: American Airlines, Southwest Airlines and United Airlines.

Allegiant will compete against Southwest on service between Albuquerque and Las Vegas, and against Delta Air Lines on flights between Los Angeles and Memphis.

The addition of Albuquerque fits with Allegiant's ongoing strategy to expand to US mid-sized cities. The airline's vice-president of network and pricing Lukas Johnson says the carrier sees an opportunity in offering competing service between Albuquerque and Las Vegas. "Southwest cut frequencies significantly in the last couple of years," he tells Flightglobal.

Southwest operates up to four-times daily nonstop between the two cities, schedules in Innovata show. The number of flights operated by the Dallas-based carrier on the route has fallen by about 25% when compared to 2013, FlightMaps Analytics show

As for launching service between Albuquerque and Austin, Allegiant's Johnson says the Texan city is among the top unserved markets from Albuquerque. 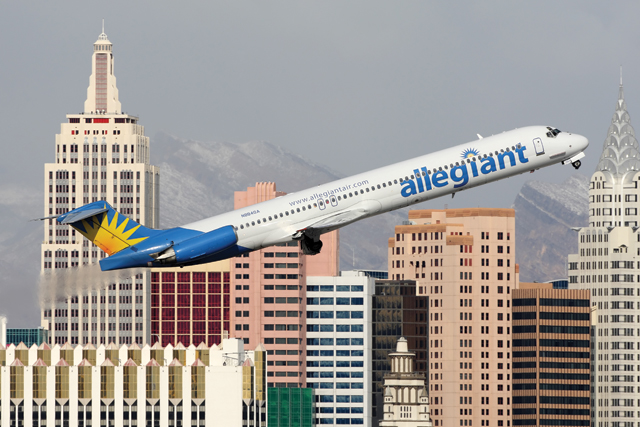 Compared with Albuquerque, Sonoma County and Evansville are smaller destinations. Sonoma County, in California's wine country, is an "interesting" city to Allegiant. "It's a unique city that we are excited about," says Johnson.

With the latest routes, Allegiant will offer seasonal service to Destin-Fort Walton from six destinations this summer.

Johnson says: "We certainly want to grow there. The economics are really good in terms of fuel prices right now."