All Nippon Airways (ANA) will take delivery of its last of three Airbus A380s, which have been specially dedicated on its Tokyo-Honolulu routes.

With the third “Flying Honu” jet, the carrier states it will operate twice-daily A380 flights between Tokyo Narita and Honolulu from 1 July. 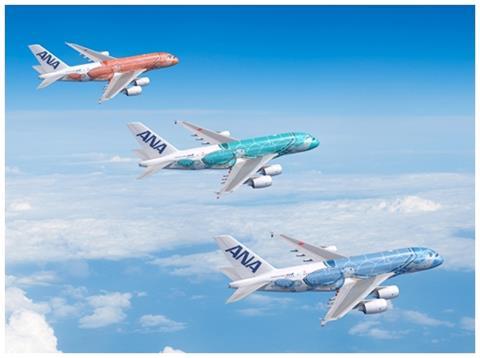 All Nippon Airways’ three Airbus A380s will be decked out in special colours.

Cirium schedules data shows the Boeing 777s are configured to seat 278 passengers, while the A380s can seat 520.

Keeping with the aquatic theme of its first pair of A380s, the Star Alliance carrier states that the third aircraft will be painted in an orange livery — representing the Hawaiian sunset. The first two jets were decked out in blue and green.

ANA took delivery of its first A380 in 2019, introducing it on the Tokyo Narita-Honolulu route.