Norman Y Mineta San Jose International airport continues to slowly spread its wings internationally, as British Airways logs into the heart of Silicon Valley with new service to London Heathrow from May 2016.

The airport has only recently begun to catch up with the global reach of local technology firms like Apple and Google. It landed a flight to Tokyo Narita International airport on All Nippon Airways (ANA) in June 2013 and to Beijing Capital International airport on Hainan Airlines this June – its first nonstops to Asia since American Airlines ended Tokyo service in 2006.

BA will launch San Jose’s third international long-haul route with a daily flight to London Heathrow on a 216-seat Boeing 787-9 from 4 May 2016.

“It’s a natural choice for us,” says Simon Brooks, senior vice-president of North America for BA, in an interview. “There are a number of reasons why it’s the perfect time for us – if you just look at the strong economic growth of the Silicon Valley and the South Bay Area it just goes from strength to strength.” 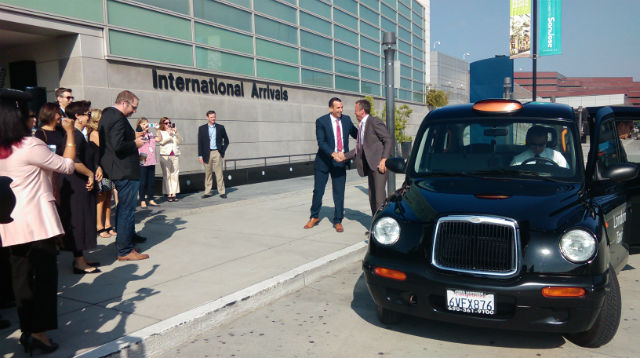 The Oneworld Alliance carrier sees strong demand for origin and destination (O&D) traffic between San Jose and London, where many US technology companies have set-up their European headquarters, and for connections beyond London to South Asia and Tel Aviv, he says.

“We believe the demand into the general Bay Area will be able to be satisfied from both San Francisco and San Jose,” says Brooks, when asked whether BA will reduce capacity to nearby San Francisco International airport with the new service.

Brooks declines to comment directly on whether the historic strength of BA’s Oneworld and transatlantic joint business partner American factored into the decision to add San Jose.

“Our partnership with American is really critical from making a success with these routes,” he says, also referring to the Austin service BA launched in 2014. “American will play a key part in making San Jose a success.”

American’s hub included the previously mentioned nonstop flight to Tokyo as well as short-lived flights to Paris Charles de Gaulle and Taipei in the 1990s.

“London is the number one requested international destination for our community, both for business and leisure,” says Rosemary Barnes, public information manager for the San Jose airport. “Our valley is, so to speak, it’s on fire and the local companies want to use their local airport that offers convenience and few delays.”

Her last comment refers to the notorious delays at San Francisco airport, which had the second worst on-time rate in the USA after Chicago O’Hare with only 69.2% of flights arriving on or ahead of schedule in 2014, US Department of Transportation data shows.

Olgierd Hinz, who handles air service development for San Jose, cites the growth of tech companies in London for the airport’s push for new service to the UK capital. For example, Mountain View, California-based Google is building a large new office for more than 5,000 employees near Kings Cross in London.

“It’s really a combination of the aircraft that can fly to Europe or Asia and the right amount of seats, not too many and not too little,” says Hinz.

All three of San Jose’s international long-haul routes will be operated with 787s, with ANA and Hainan operating 787-8s to the airport.

International passenger traffic will continue to rise at San Jose with the new London flight. International numbers were up 16.3% to 37,283 compared to a 2.2% increase in domestic numbers in June, airport data shows.

International traffic at the Silicon Valley airport has more than doubled to 349,836 passengers during the year ending this June compared to the same period ending June 2012. 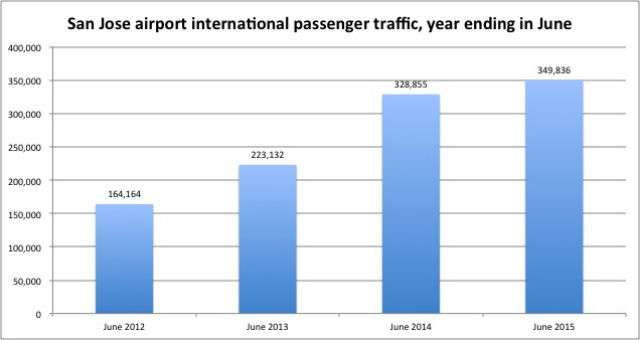 Passengers on international flights made up 3.7% of the 9.55 million passengers San Jose handled during the year ending in June. A considerable increase from the 0.02% share if traffic three years ago.

San Jose lacks frequency in some key domestic markets, even as it lands new headline-grabbing international flights. Its once daily flights to both Boston and New York are “just not enough”, says Hinz.

“We’re still very much focused on domestic destinations and new service to key cities where we have too little service,” he says.

JetBlue Airways offers red-eye flights to both Boston and New York John F Kennedy airports, which Hinz is quick to say they are very happy with but that they see demand for more service, especially daytime options on both routes.

New York-based JetBlue has hubs in both Boston and New York, while American, Delta Air Lines and United Airlines have hubs in the New York area.

American Airlines previously provided the only nonstop service between San Jose and the Dallas area via Dallas/Fort Worth International airport. It was also the last to offer nonstop service to Eugene, ending flights in 1993 when it closed its hub at the airport.

San Jose is also looking for additional international service to both Asia and Europe, says Barnes. Canada is also a focus, a market that was served by Air Canada in the past.

“It’s a marathon, not a sprint to get these communities that businesses are requesting over the finish line,” she says.