Australia’s Jetstar has commenced operations from Sydney to Seoul Incheon, the first in a series of newly-launched flights between Australia and South Korea.

A 3 November statement from Jetstar says it will operate three flights a week with its Boeing 787-9s. Seoul Incheon will be the low-cost carrier’s third North Asian city, after Tokyo and Osaka. 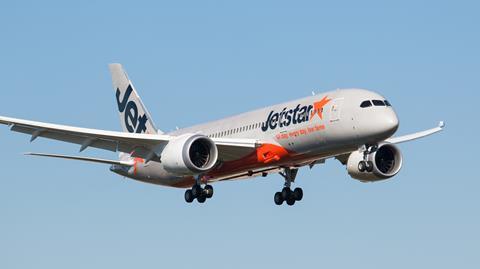 With the launch of flights to Seoul, Jetstar pips South Korea’s T’way Air to be the first low-cost operator to fly between the two countries. In mid-October, T’way announced it would begin operations between Seoul and Sydney from 23 December, marking its foray into the long-haul market.

It will will use its high-density A330s, which seat 347 passengers, for its flights.

Jetstar parent Qantas is also set to begin Seoul operations from 10 December, deploying its Airbus A330s on flights to the South Korean capital. The launch marks the flag carrier’s return to the South Korean market after a hiatus of nearly 15 years.

Presently, only Korean Air and Asiana Airlines fly between Sydney and Seoul. According to Cirium schedules data, Korean Air has five flights a week, also operated by A330s, while Asiana – which will soon be merged into Korean Air – flies five times a week with 777s.