The temporary closure of most of the resorts on Boracay by the Filipino government from late April has led Philippine Airlines, Cebu Pacific, and Philippines AirAsia to cut a number of flights to Caticlan and Kalibo between 26 April and 27 October.

PAL says that from 20 April to 27 October it will operate nine weekly flights from Manila to Kalibo and daily Manila-Caticlan flights. As a result of the changes, it will also boost frequencies on a number of other routes. 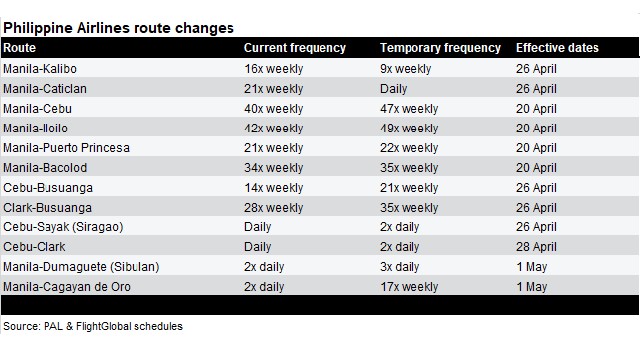 PAL president Jaime Bautista says that the carrier supports the government’s efforts to remediate environmental damage and fix safety issues at the island.

“We seek the understanding of our passengers as your flag carrier and the aviation industry cooperate in this multi-sectoral endeavor. In the long-term, a safe and revitalised Boracay will benefit all stakeholders in the travel and tourism sectors, and the Filipino people as a whole,” he adds.

Cebu Pacific and its Cebgo unit will also reduce its Manila-Kalibo, Manila-Caticlan and Cebu-Caticlan flights to daily services. A number of other routes from Kalibo and Caticlan will be suspended for the six months.

Philippines AirAsia advises that it will reduce its Kalibo-Manila and Caticlan-Manila flights to daily services. Its flights from Caticlan to Cebu and Clark, and from Kalibo to Seoul Incheon, Clark, Busan, and Shanghai will all be suspended.

It adds that it will operate more flights to Cebu, Davao, Palawan, Bohol, Iloilo, and other leisure destinations, but did not provide further details.