US regulators have tentatively approved eight US carriers to launch service to Havana, following an intense competition among airlines to begin flights to the Cuban capital.

The Havana flights will likely begin in late 2016 or early 2017, said US transportation secretary Anthony Foxx in a conference call with reporters earlier today.

Objections to the US Department of Transportation’s (DOT) decision are due 22 July, with answers to objections due 29 July. The DOT expects to finalise its decision later this summer. 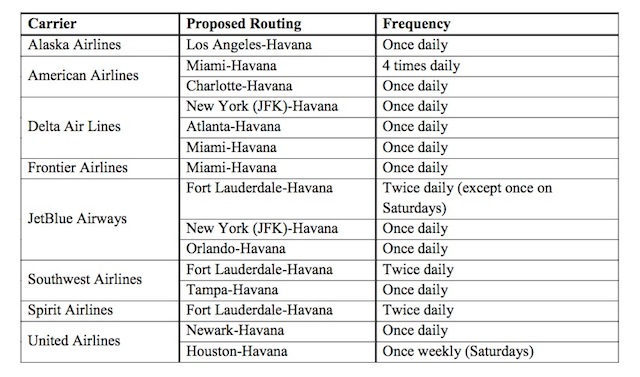 US Department of Transportation

“We chose airlines that can offer and maintain the best service to Havana,” says Foxx. The agency also sought to ensure that travellers had a wide range of carriers to choose from, ranging from network carriers to low-cost airlines and ultra low-cost carriers, he adds.

Among the airlines that had sought Havana service, Silver Airways, Sun Country Airlines and Eastern Air Lines were not awarded frequencies. In June, Sun Country and Silver were awarded rights to fly to other Cuban cities. The DOT had earlier deferred its decision on Eastern’s application, saying that the charter carrier had not completed the licensing steps needed to begin scheduled flights.

The 10 carriers that had applied for Havana flights had collectively requested almost 60 daily flights to the Cuban capital - or almost thrice the 20 daily flights allowed for under the US-Cuba bilateral air services agreement.

Foxx says the DOT chose airlines that operated “significant hubs” on their requested routes, or from areas where a significant number of Cuban Americans reside.

Data from Washington DC-based think tank Migration Policy Institute shows that Cuban immigrants are overwhelmingly based in Florida, with smaller populations in California and New Jersey.