Frontier Airlines will launch a further 14 new routes later this year, on top of the dozens of new routes it announced in recent days.

The new routes will see Frontier resuming service at Colorado Springs, Columbus, Pittsburgh and San Antonio. The Denver-based carrier had served the cities at one point, before axing service in previous years.

"We have 18 new planes delivering this year, growing the fleet by nine additional units after retirements," says Frontier president Barry Biffle. "This allows us to bring affordable low fare service to people and markets that have never had it, stimulating new travel. We see hundreds of additional opportunities like these throughout the country, fueling our growth for years to come."

The new routes follow Frontier’s recent announcement that it will roll out dozens of new routes in the coming months, placing the carrier in direct competition with mostly the four US major carriers.

The latest new routes are no different, schedules in Innovata show. Frontier will compete on most of them against mainly Delta Air Lines, American Airlines, United Airlines and Southwest Airlines. 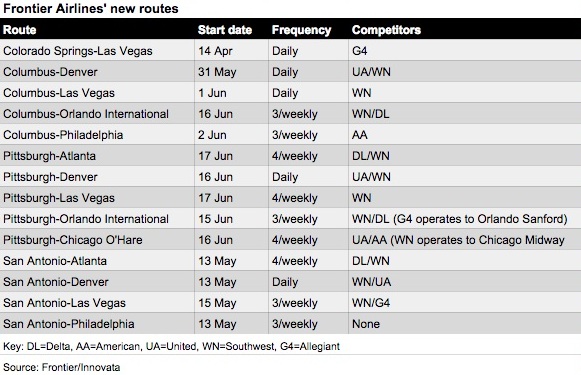