Akbar Al Baker has probably just endured the toughest 12 months of his lengthy reign at Qatar Airways Group. Just as the airline marked 20 years with Al Baker at the helm, it faced the sudden and sweeping airspace blockade forcing a rapid network restructure, the suspension of services to 18 destinations and lengthy flight re-routings, particularly those to Africa.

On that "evil day of 5 June 2017", as Al Baker describes it, Qatari-registered aircraft were banned from overflying the airspace of Saudi Arabia, the United Arab Emirates, Egypt and Bahrain amid a regional political dispute. 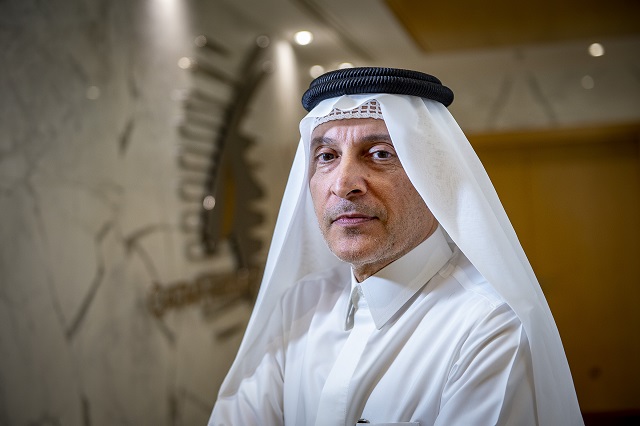 Unsurprisingly, this had an immediate impact on traffic over Qatar Airways' Doha hub causing "a huge drop in passenger numbers", says Al Baker. But this is now recovering. The airline reported its full-year results in September, which saw a group pre-tax loss of QR156 million ($43 million) – a result that Al Baker says was considerably better than early estimates and what he considers "a textbook exercise in how to win against a blockade".

"We lost 20% of our capacity and nearly 13% of our network. This was a big shock. But we found new markets. When you now compare June, July and August, we have grown 11% year on year compared with the first three months of the blockade," he says.

For the airline's latest full financial year (to 31 March 2018), it suffered an 8.9% drop in passengers to 29.2 million. This compares with just over 32 million in the previous 12 months and followed years of consistent double-digit growth.

"They thought there would be a meltdown on Qatar Airways with this massive loss of revenue stream, losing 18 destinations; that Qatar Airways would have to park aircraft and cancel orders. And we did everything exactly the opposite and have been very successful," he says.

"We already had a plan to increase our network but we couldn't do it because we had a shortage of aeroplanes. [The blockade] gave us the opportunity with the additional capacity, so we brought forward all those new routes that we wanted to operate in the longer term," he says.

This enabled Qatar Airways to replace the 18 lost routes with 24 new destinations.

The airline was also able to use its strategic investment with IAG to soak up its short-term capacity excess, by transferring aircraft to assist British Airways when it faced industrial action last year. Around the same time, the failure of Monarch also provided some short-term relief for its capacity, "so we didn't park any aircraft".

Al Baker says Qatar will continue to increase frequencies around its network and find new destinations, but admits that he does not expect the political situation to improve any time soon.

"I think the blockade is here for the long term unless there is some dramatic change on the political scene, because the neighbours are lobbying more and more people against my country. So I don't see there is any intention from their side to negotiate a settlement," he says.

"It's very difficult for them to realise that their aims have been unsuccessful and the whole exercise has been futile," Al Baker adds defiantly.

"Frankly, we have forgotten about the blockade. We know that it's going to stay and we have just continued our march ahead. We have a very large list of new destinations that we wanted to operate over a five-year period and we have brought that forward and continued expanding."

Before the end of 2018, three more destinations will be added to the network – Da Nang, Gothenburg and Mombasa.

However, Al Baker admits it has been a hugely challenging period, as the effect of the blockade not only eliminated key destinations but also forced re-routings that are having an economic impact.

"A lot of routes became uneconomical because in markets that were only fitting for a narrowbody we have had to shift to a widebody in order to carry additional fuel due to the longer routings."

The blockade affected Qatar Airways' brand-new hub, Hamad International Airport, which opened in 2014. However, it remains one of the world's fastest-growing airports, handling 34.2 million passengers in 2017-2018 (of which Qatar Airways accounted for 30.3 million). The airport is expanding towards a 50 million-plus passenger target.

The cargo side of Qatar's business has flourished, as the airline initially served as an "air bridge" to supply the country's domestic needs in the wake of the blockade, and the airline has expanded its network and capacity during the year.

Three new freighters joined the fleet during the period – one Boeing 777F and two 747-8Fs. And with two more 777Fs joining during 2018, the freighter fleet has grown to 25 aircraft.

"I’m proud to say that in the first nine months of this year, Qatar Airways is now the largest air-cargo operator in the world in terms of freight tonne kilometres. We were number two," Al Baker says. The airline that Qatar has displaced is local rival Emirates. 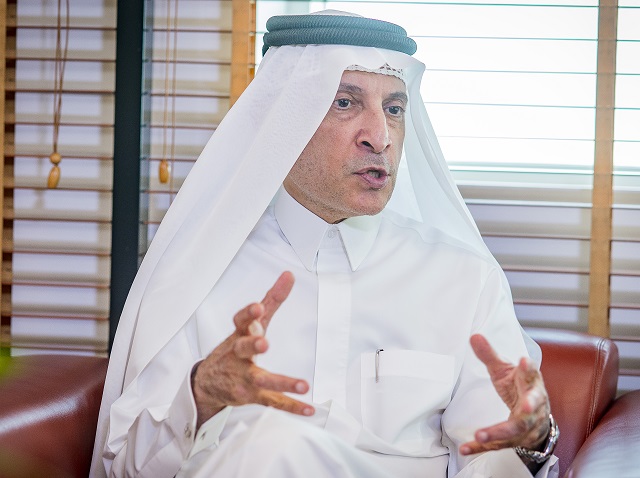 The blockade has influenced the geographical focus of the airline's passenger operations, which now centres upon Europe, Asia-Pacific and the Indian subcontinent, says Al Baker. "We are making partnerships with Indian domestic partners. We are very close to agreeing codeshares with Indigo and GoAir."

Al Baker retains a desire for direct participation in the Indian market "if the Indian authorities allow us. I will always be very keen because India is a very important market for us and it will have a shortage in domestic and we want to fill that in".

Qatar Airways' strategy in the US market has proved more resilient than its local Gulf rivals amid the various security and travel restrictions briefly implemented last year. Though the restrictions enforced on US-bound flights around personal electronic devices along with the ban on travel from certain Muslim-majority countries were short-lived, North American demand was affected.

"We made sure we reduced capacity – by changing the type of aircraft – but did not reduce frequencies," says Al Baker. "And we have been very successful doing that."

But there is no further expansion in the USA currently planned beyond the already-announced intention to serve San Francisco and Las Vegas. "We are now waiting to see when exactly the capacity will be available to launch those routes," says Al Baker.

Back in February, the Qatari and US governments signed an accord designed to create a level playing field between Qatar Airways and US carriers. It came following almost three years of wrangling amid pressure from the US majors over what they perceived as capacity dumping by the Gulf carriers.

The February agreement requires Qatar Airways to use international accounting and auditing standards, disclose financial results and undertake not to add US services from other countries – ie fifth-freedom flights. This latter is already proving contentious with regard to Qatar Airways' 49% investment in Air Italy (the former Meridiana) and could have far-reaching consequences for the Oneworld alliance.

"We do not have any intention of [operating] fifth-freedom flights. We are very satisfied with the open-skies agreement with the USA and we have not violated any agreement," he says.

"Qatar Airways does not codeshare with Air Italy beyond Milan, we do not transfer passengers beyond Milan and we have no intention of doing it in the future."

Al Baker’s irritation with fellow Oneworld members extends to Qantas, which has an extensive tie-up with Gulf rival Emirates and a "trivial" relationship with Qatar. "And it is blocking us getting rights into Australia," he adds.

"The whole idea behind an alliance is to work together to support each other like a family. But I don't think that is any more the spirit of the alliance."

Al Baker has warned Oneworld chief executive Rob Gurney that "this whole shenanigan has to stop" or he's off, and the alliance boss has asked for some time to seek a resolution. "I will wait for him to come back before deciding what to do."

Qatar Airways Group holds 20.01% of IAG, 10.03% in LATAM and 9.94% in Cathay. The Air Italy relationship was cemented through the acquisition of 49% of Meridiana parent AQA Holding. The previous sole shareholder Alisarda maintains 51%. The group also has a share in in US private charter operator JetSuite. The wider Qatar Airways Group comprises cargo, executive, catering, and ground handling as well as duty-free and holidays businesses.

While LATAM has run into some recent turbulence – "it has its own issues with the A320neo and capacity with the A350" – Al Baker says this investment is "strategic and long-term, so we are going to stick with them".

He highlights the "huge transformation" Cathay Pacific is undergoing, declaring his "full confidence" that chief executive Rupert Hogg will "do what he has to do. I can see Cathay performance is already in an upswing," he says.

April's JetSuite investment came as a proxy for the intended investment in American Airlines, but "we were snubbed", says Al Baker. "We looked for another opportunity and found that in JetSuite."

The most significant investment is in BA, Iberia and Aer Lingus parent IAG. Al Baker says the Anglo-Spanish group is "doing very well under the leadership of Willie [Walsh], so we are very satisfied with our strategic investments".

He adds that any opportunities to work more closely with its strategic partners will be taken "as they come…keeping in mind that we do not in any way violate anti-trust regulations".

Qatar's desire to take a share in Royal Air Maroc has cooled as the airline reorganises under new management and works through the process to join Oneworld. "So we will wait for them to come back to us when they're ready to offer us a stake.”

Meanwhile rumours about Qatar Airways taking stakes in Turkish Airlines and Aeroflot are "untrue", he says. "We are not going to just grab any opportunity we get. We want to make sure that investments we make are solid and robust and give us a good long-term return.

"We continuously get opportunities, but we don't jump into every one like some others have done and got their fingers burnt."

A big focus of the past two years for Al Baker has been the launch of the Qsuite premium product uniquely featuring a double-bed in a business cabin, which the airline's marketing literature accurately describes as a “first-class experience in the business-class cabin".

The task now is to roll out the product across the A350 and 777 fleets for which it was conceived. The design also needs to be adapted for the narrower A380 and 787 business cabins. Al Baker hints that work on that is well advanced.

From a fleet perspective, Qatar Airways continues to take delivery of new aircraft at an impressive rate but is not planning any more shopping sprees for the moment.

With such a large backlog, the outlook is a slightly unfamiliar one for Qatar Airways, with Al Baker declaring: "At the moment we have placed all the aircraft orders we need and are not looking at any more new ones."

GENDER FIRMLY ON THE AGENDA

Akbar Al Baker often appears to enjoy his reputation for being outspoken. But the gender-equality storm he created at June's IATA AGM in Sydney was clearly one he wished he had avoided.

Having just taken over the chair of the IATA board and pledged to avoid making controversial statements, Al Baker then caused uproar when responding to a question about women running airlines, suggesting Qatar Airways "has to be led by a man".

Al Baker, who subsequently apologised for any offence his comments may have caused, admits to have been taken aback by the reaction they generated. He says he did not mean to generalise about the ability of women to run big businesses like airlines, adding: “Without doubt, ladies can be and have been very successful as CEOs."

He points out that Qatar Airways has an impressive track record on female employment, where women account for 44% of the workforce. "Tell me which airline in the world has this high a proportion of ladies working for them?"