Manchester airport shuts one of its terminals again as recovery stalls

Manchester airport is to temporarily close one of its terminals again from next month in a further sign of the slower-than-hoped-for pick-up in travel demand.

The airport operated with just Terminal 1 open during the height of the pandemic before reopening Terminal 3 from the start of July and Terminal 2 later that month, as airlines began restoring their networks. It will now close Terminal 2 again until further notice. 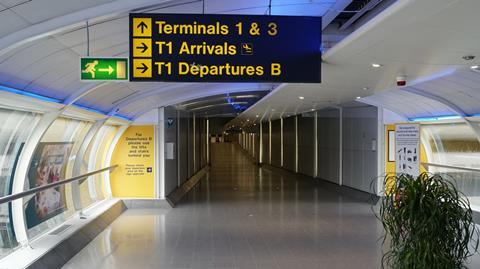 Manchester airport managing director Karen Smart says: “Having re-opened Terminals Two and Three in July, we have continued to monitor the travel patterns of our airlines and passengers, in order to adapt our operations accordingly.

“With that in mind, we have taken the decision to close Terminal Two again from 2 September.”

Air travel demand has stuttered since states in Europe began easing travel restrictions. Notably demand has dampened from the UK, which since opening up markets for air travel again from the start of July, has reduced the number of countries from which visitors do not need to quarantine.

Low-cost carrier Ryanair a week ago said it was reducing its planned capacity for September and October by 20% as demand for intra-European travel weakens amid government-imposed restrictions.