AirAsia was granted new traffic rights into Indonesia by the Malaysian Aviation Commission (MAVCOM), with flights into eastern parts of Indonesia.

MAVCOM states the low-cost carrier was cleared to launch flights from Kota Kinabalu to Balikpapan and Manado, as well as Kuala Lumpur-Balikpapan. Cirium’s schedules data shows that AirAsia will be the only carrier to operate these routes.

The schedules data shows that AirAsia X will be the only airline operating Kuala Lumpur-Hefei route. On the Taipei-Okinawa sector, it will be entering an already crowded market, competing with All Nippon Airways, China Airlines, EVA Air, Peach Aviation, Tigerair Taiwan, as well as Vanilla Air. 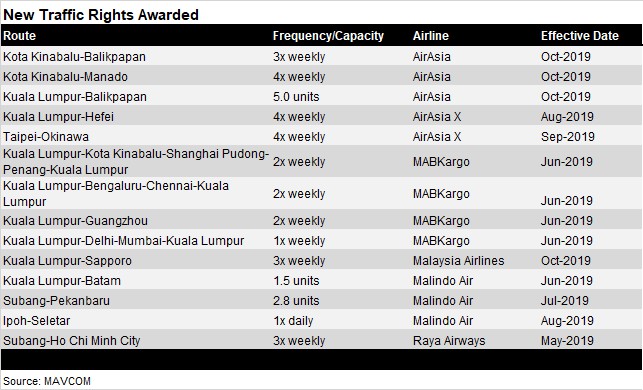 Malaysia Airlines was cleared to launch flights between Kuala Lumpur and Sapporo, where it will face competition from Air Asia X.

Malindo Air is permitted to operate Kuala Lumpur-Batam, Subang-Pekanbaru, and Ipoh-Singapore Seletar services. It will be the only carrier plying these routes, the schedules data shows.

Separately, AirAsia returned its rights for Kuala Lumpur-Lombok on 17 May, states MAVCOM.