Qantas could introduce ultra-long-haul flights under its delayed Project Sunrise programme as soon as 2024, according to the carrier’s chief executive, Alan Joyce.

“We still want to revisit it at the end of [2021], with the potential of doing it in [2024], probably, and onwards,” Joyce said during a Eurocontrol event today.

Initial plans would have seen Qantas order up to 12 Airbus A350-1000s last year and launch direct services from Melbourne and Sydney to London and New York from 2023.

The programme was “put on ice” amid the pandemic, Joyce says, but its launch might only be delayed by 12 months or so.

“That’s the timeframe that we think we could get there,” he states regarding a 2024 launch, while reiterating that Qantas was previously ”literally weeks away” from ordering A350-1000s that would be adapted for flights of up to 21 hours. 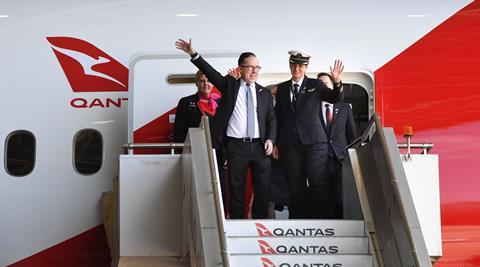 Joyce expresses enthusiasm for the attractiveness of such services in a post-pandemic world, noting that the direct Perth-London sector was the carrier’s “most profitable” international route pre-crisis with the “highest customer satisfaction”, despite it being Qantas’ longest flight.

Speaking earlier this month, he suggested that people are likely to have a preference for flying direct, as opposed to through hubs, when international travel returns.