Seaplane service from New York to DC area takes off

Tailwind Air launched passenger seaplane service between New York and the Washington, DC area on 14 October after tweaking its route in response to security concerns from federal regulators.

The regional carrier said in August that the first flight on a new route connecting New York’s Skyport seaplane terminal on the East River to College Park airport in Maryland would take off on 13 September. But the first flight on the new route was postponed pending security reviews by the US Transportation Security Administration (TSA) and Federal Aviation Administration.

“In the proposed operation into College Park, we were in compliance with all regulations,” Tailwind founder and chief executive Alan Ram tells FlightGlobal. “There was no rule that was in question; it’s more that within the inner ring of DC airspace, there are national security concerns and stakeholders that get a say.” 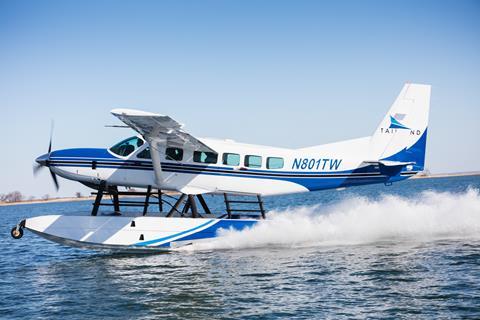 The company is still working with the TSA to possibly fly into College Park next year, Ram says.

Tailwind has flown a variety of routes out of its base in New York City for about six years, Ram says. Last year, it introduced flights from New York to Boston. Ram believes the new route to Washington, DC complements Tailwinds’ network.

“For years, we have operated different versions of what we call the leisure routes – Manhattan to the eastern end of Long Island, East Hampton and Montauk,” he says. “We’ve done Martha’s Vineyard and Nantucket from New York. This year was our first year running [to] Provincetown in Cape Cod through Boston.”

Passenger flights on seaplanes is well established in the Pacific Northwest but uncommon in the Northeast USA. Though seaplane operators have connected Manhattan to East Hampton for years, Tailwind is the first company in the area to “dramatically expand its offerings” on a regional scale, Ram says.

Ram conceived of the seaplane-based passenger service about a decade ago, he says. As someone who is from the New York area and has family in Boston, he has been up and down the Northeast corridor “every which way you can – car, train, flying – and nothing is good or efficient”, he says.

Tailwind’s ability to mostly avoid major airports and fly more directly to urban areas is “a primitive version of urban air mobility”, Ram says. “We’re doing it on more of a regional scale rather than an inter-city scale. … But it’s really solving the same kind of problem. In our case, it’s connecting city centres directly, without having to get into and through major airports.”

Tailwind markets itself as a time-saving transportation service and an alternative to “wildly inefficient” air travel through major airports, Ram says. Whereas getting from New York to Boston by other means can take 7-8h, he says, “We like to say you can go door-to-door in as little as two hours”.

There is also novelty in getting a bird’s-eye view of New York City on approach and landing on the water in Manhattan, which can be a thrill for passengers, Ram says.

“We hear from passengers all the time about how much they love flying into the cities,” he says. “You’re not just flying over New York on your way to LaGuardia, you’re making your final approach right into the river.”

Tailwind’s service is mostly oriented toward business travellers, but it also transports a fair number of sightseers and vacationers, Ram says. The carrier has added weekend service Boston to accommodate leisure travellers who are briefly popping into the city for a show or to visit relatives. In the future, the company may offer weekend flights to Washington, DC, depending on demand, Ram says.

Tailwind also plans to expand its fleet of Caravans from three to four next year, and eventually explore adding routes outside the Northeast USA.

Longer term, Ram envisions embracing the emergence of advanced air mobility (AAM), pointing to hybrid-electric Caravans as a step toward adopting electric vertical take-off and landing (eVTOL) aircraft. But for now, conventional seaplanes are the backbone of its business.

“We absolutely have our eye on the next generation of equipment,” he says. “We’re also trying to do something today.”