Southwest Airlines will no longer begin planned service from Paine Field in Washington state, after transferring its five daily flights at the airport to Alaska Airlines.

"The decision is based on business considerations and terms of the agreement are confidential," says Dallas-based Southwest.

The transfer, subject to government approvals, will allow Alaska to operate up to 18 daily nonstop flights from Paine Field when the airport opens to commercial service in early 2019. Alaska announced the start of sales today for the flights, scheduled to begin operating on 11 February 2019. 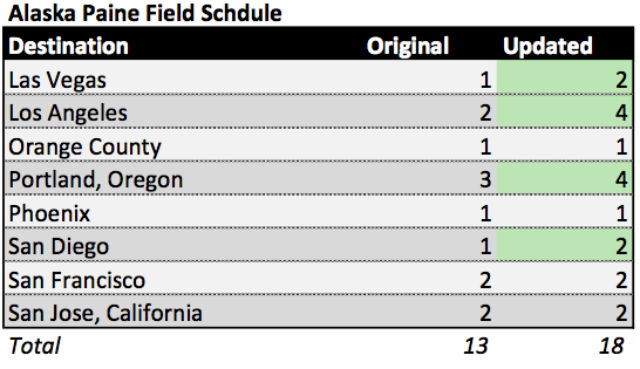 Southwest's move to not begin Paine Field service will leave Alaska and United as the only two carriers operating from the airport. United plans to operate four times daily to San Francisco and twice daily to Denver. Southwest had originally planned to begin flights to Las Vegas and Oakland from Paine Field. The airline already serves Seattle.

Even as it decides to not start service at Paine Field, Southwest today announced an expansion from Nashville as it extends its schedule through 5 August 2019.

Beginning 9 June, it will begin daily service from Nashville to both Burbank and San Jose in California. It will also add seasonal service on Sundays between Nashville and Omaha, and boost frequencies on several routes from Nashville.

The airline expects to offer 124 daily departures on weekdays and 133 departures on Sundays with the additional routes and frequencies at Nashville.

Separately, Southwest will begin nonstop service between San Diego and Omaha; Ontario (California) and San Francisco; and Austin and Raleigh-Durham from 9 June. It will operate four-times daily on weekdays and thrice daily on weekends on the Ontario-San Francisco route, and daily on the other two city pairs.

Additionally, Southwest will begin seasonal service on Saturdays from 15 June between Baltimore/Washington and Grand Cayman; and between Houston Hobby and Punta Cana. The routes are subject to government approval.