South Korean low-cost carrier T’way Air will resume a number of flights to Japan and Southeast Asia in May, as it eyes a steady increase in travel demand.

The carrier says it will resume flights from Seoul Incheon to Fukuoka, Osaka, Tokyo Narita, Da Nang, Bangkok, and Ho Chi Minh City in May, with flights to be operated once or twice weekly. 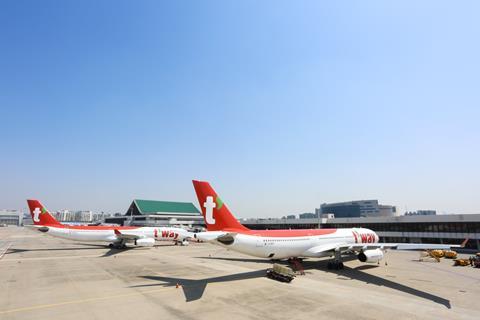 It will also resume flying twice a week to Guam in late-April, with frequencies set to increase to four times weekly in May.

The network ramp-up comes as the airline takes delivery of its second Airbus A330-300 (HL8502), which it will operate on domestic flights between Seoul Gimpo and Jeju.

T’way expects to take its third example in mid-May, paving the way for the deployment of the A330s on new international routes, including to Australia, Singapore and eastern Europe.

The carrier took delivery of its first A330 in February, becoming the second South Korean low-cost carrier to operate widebodies after Jin Air.