United Airlines will add service more than 30 domestic markets beginning in June, as it embarks on a major network expansion.

“Over the past five or six years United has been shrinking, while our competitors have been growing at our expense,” says Scott Kirby, president of United, in a letter to employees today. “Now, we're going to continue on our journey to become the world's best airline by realising the full potential of our network.”

The new routes not previously announced include: Chicago O’Hare to Charlottesville, Reno and Spokane; Denver to San Luis Obispo; Houston Intercontinental to Springfield/Branson; Newark to Sacramento; and San Francisco to Hartford and Spokane. 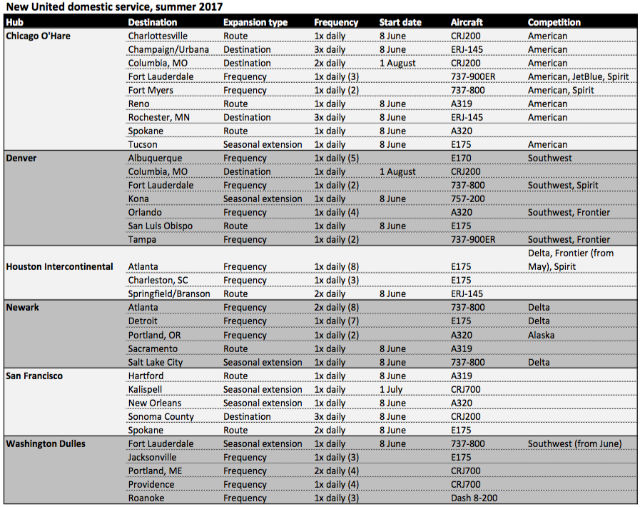 In addition to the new domestic routes, United will offer daily seasonal service between San Francisco and Munich on a Boeing 787-8 from 24 May.

Kirby has discussed plans to revamp and expand United’s domestic network through rejigging its schedules and increasing aircraft utilisation since he joined the carrier from American Airlines in August 2016.

“While I wish we could realise all of our growth aspirations overnight, it will take several years and we’re prioritising growth in competitive markets in the near term,” says Kirby today.

Additional growth will occur in Chicago O’Hare and Los Angeles, the latter being the only hub with no new flights this summer, as the carrier secures additional gates and facilities at the constrained airports, he says.

The mainline carrier has signed a new capacity purchase agreement with Air Wisconsin for 50 Bombardier CRJ200s to support the growth, Kirby says in the letter. The aircraft, which will begin joining United's feeder fleet this summer, will keep its regional fleet “level” as other partners remove 50-seaters in favour of larger regional jets.

“We get to add these additional aircraft feeding small ­city traffic into our hubs, and AA [American Airlines] loses lift that used to be feeding its hubs,” he says on the Air Wisconsin deal.