Israel's latest pair of Lockheed Martin F-35s landed at Nevatim air base on 14 September. The arrivals brought the total number of "Adir" jets operated by the nation's air force to seven.

"The arrival of two additional aircraft will allow us to become operational according to plan," says Brig Gen Eyal Grinboim, base commander at Nevatim.

By the end of this year, a further two F-35Is will join the air force's "Golden Eagle" squadron. The service plans to conduct an inspection in December, ahead of declaring initial operational capability (IOC) with the stealthy type. 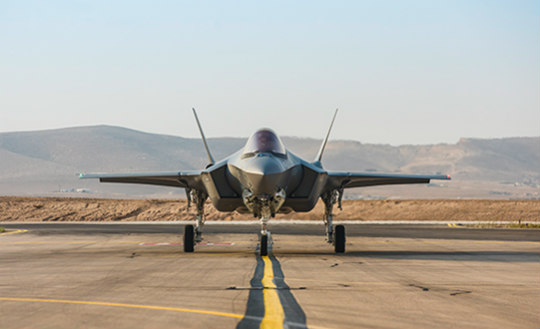 A US delegation led by F-35 Joint Programme Office head Vice Adm Mathias Winter recently visited Israel and met with squadron personnel. The officials were briefed about the efforts the service is making to achieve its IOC goal, and the Israeli-made systems which are being incorporated into the type. They also visited the Israel Aerospace Industries facility which manufactures wings for the F-35 programme.

Testing of Israeli-developed systems and in-flight refuelling procedures for the F-35I are already taking place. Israel has a current total of 50 conventional take-off and landing fighters on order, with deliveries expected to be completed by 2027.