Among the military highlights at Le Bourget this year will be a first glimpse of a proposed future European combat aircraft being advanced via an ambitious collaboration between France and Germany.

In February, the nations signed a joint concept study deal linked to a Future Combat Air System (FCAS) programme, which plans to deliver a broad-ranging set of capabilities to their armed forces for frontline use by 2040. 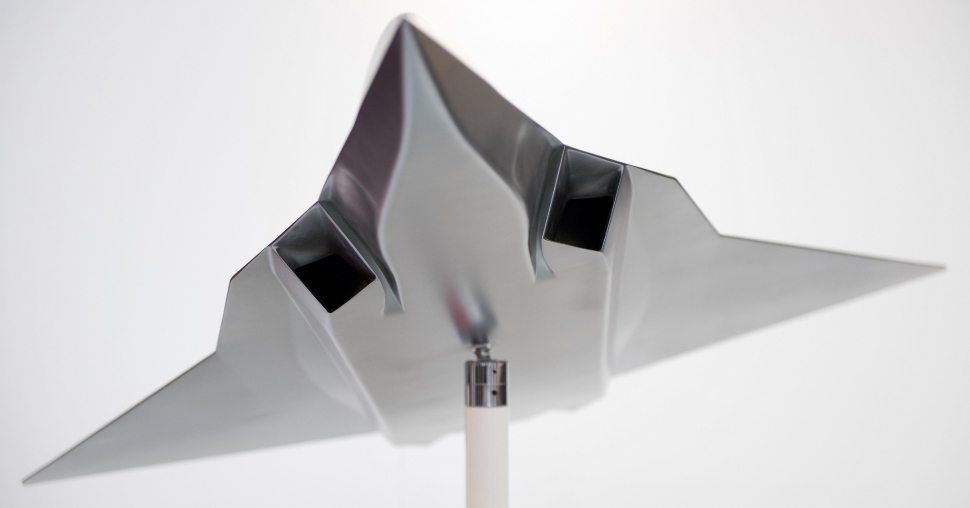 Describing the two-year study phase as a means to “secure European sovereignty and technological leadership in the military aviation sector for the coming decades”, industry partners Airbus Defence & Space and Dassault promised that this would “initiate demonstrator programmes for launch at the Paris air show”.

Continuing a joint activity formalised at the ILA Berlin air show in April 2018, the FCAS project has grand ambitions and is influenced by a bilateral high-level common operational requirements document. A cutting-edge Next Generation Fighter will be complemented by sophisticated unmanned systems referred to by the companies as “Remote Carriers”, with the effort also to deliver new and upgraded weapons – all connected via a so-called “Combat Cloud”.

A variety of artwork previously shown by Airbus and Dassault suggests that a “sixth-generation” configuration for a manned or unmanned fighter could feature twin canted tails or a tailless design. They note that the current work will assess the “operational and technical viability” of such concepts.

In industrial terms, both parties have much to offer, with long experience in manufacturing and currently delivering Eurofighter and Rafale fighters, respectively. Dassault also led the pan-European Neuron unmanned combat air system demonstrator programme, while Airbus’s military arm developed and tested the Barracuda technology demonstrator, first flown in 2006. They are also currently collaborating on a European medium-altitude, long-endurance unmanned air vehicle to be used for intelligence, surveillance and reconnaissance tasks.

While it is still early days for the Franco-German FCAS, Spain has already moved to join the effort, and Airbus officials have voiced hopes that it could become a broader collaboration, perhaps also attracting high-profile partners such as the UK.

For now though, factors such as the UK’s pending departure from the EU via Brexit and a failed previous collaboration between BAE Systems and Dassault on an Anglo-French FCAS demonstrator programme ­appear to make a one-size-fits-all solution for the future of European air combat out of the question.

Today’s fighter arena remains a crowded space, with Saab’s in-development Gripen E, the Eurofighter Typhoon and Rafale representing a trio of European rivals during hard-fought competitions. With France, Germany and Spain eyeing a joint FCAS, the future may also see a formidable rival in the shape of the UK’s Tempest – a sixth-generation concept unveiled at last year’s Farnborough air show – championed by an industry team including BAE, Rolls-Royce and Leonardo’s UK arm. The Swedish government and Saab have made no secret of Stockholm’s potential interest in also becoming involved in the UK-led programme.

Much could change over the coming years, but in the shorter term, fighter manufacturers are pursuing multiple sales opportunities around the globe with their current products.

Switzerland is currently conducting in-country evaluations of an intriguing mix of types, as it advances with a planned procurement that ultimately seeks to replace both its Boeing F/A-18C/Ds and Northrop F-5s by 2030. The ongoing process at Payerne air base has already seen Eurofighters, F/A-18E/F Super Hornets and Rafales complete visits, with the Lockheed Martin F-35A and Gripen E to round out the assessments.

Bern’s last attempt at replacing its F-5s failed after a public referendum rejected the funding required to buy the Gripen; a step that has resulted in the Northrop type becoming an all-but obsolete asset for the Swiss air force today.

Not so long ago, there was an assumption that the F-35 might sweep all before it during such contests, but as demonstrated in Switzerland and Canada – which is also currently assessing its future fighter needs – rivalry remains as keen as ever. In part, this is because while Lockheed says the cost of its conventional take-off and landing F-35A is on course to fall below $80 million next year, the Lightning II’s operating costs are currently much higher than earlier-generation offerings.

Despite this, Poland’s defence minister has signalled the nation’s intention to take 32 A-model examples, to replace its Soviet-era RAC MiG-29s and Sukhoi Su-22s from the mid-2020s. Greece has also expressed interest in the F-35 as a potential long-term successor for its Lockheed F-16s.

Richard Smith, Saab’s head of sales and marketing for the Gripen, notes that the competitive landscape has altered over recent years, with some customers changing their emphasis from through-life cost considerations to acquisition price.

“There is a significant shift in the market to look at acquisition cost – people are not as concerned about the cost per hour over the next 30 years,” he notes.

Croatia represents one such example. After a competition, it selected ex-Israeli air force F-16s upgraded by the nation’s industry. The transaction foundered, however, following US objections linked to equipment covered by Washington’s international traffic in arms regulations framework.

Meanwhile, well aware that its F-35 is not the ideal fit for every air force and budget, Lockheed is stepping up its efforts to extend the life of its venerable F-16. With final assembly having been moved from Fort Worth, Texas, to Greenville, South Carolina, the fighter appears by no means finished on the international stage.

New Delhi is being offered the type for local assembly, with Lockheed having used February’s Aero India show in Bengaluru to rebadge its V-model enhancement as the F-21. Its latest standard also recently secured approval for a repeat sale to Morocco, which intends to have its in-service examples modernised to the same standard.

Boeing, meanwhile, is enjoying a production revival with both the Advanced F-15 and Super Hornet products – which had appeared to be reaching the end of their lives. The company is preparing to move from F-15SA production for Saudi Arabia to building a QA model for Qatar, and the US Air Force plans to acquire up to 80 more examples in a new EX variant. These will replace some of its oldest F-15C fighters at a significantly lower per-hour operating cost than the F-35A.

Dassault is also enjoying a spike in demand for its Rafale, which will see annual deliveries – which have typically totalled 11 aircraft – climb beyond 20 units this year. While production has concluded for Egypt, first shipments have been made for Qatar, and India’s lead example has already been flown. Further examples must still be built to complete expected commitments from the French air force and navy, meaning that the company’s manufacturing status will be secure until its attention turns more to the proposed FCAS product range.

The French company’s new industrial ally, Airbus Defence & Space, is today part of the Eurofighter consortium. It is leading efforts to promote the type for a potential follow-on requirement with the German air force, which is looking to replace its Tranche 1 production examples of the type over the coming years, and also transition duties from its ageing Panavia Tornados.

Airbus has described additional Eurofighters, to be produced in an enhanced configuration, as “the logical option” to provide a bridging solution ahead of FCAS availability. It faces a surprise rival in the guise of the F-15, but Berlin has ruled out becoming an F-35 operator.

Saab has made a good start with its Gripen E, with combined sales of 96 to date, for its home air force in Sweden (60), and first ­export customer, Brazil (36). In addition to its current competitive pitches to Canada, India and Switzerland, the company also sees ­opportunities for its new model, or the earlier-generation C/D-model, as existing with nations including Bulgaria, Colombia, Finland, Malaysia and the Philippines.

As the operational fleet of F-35s passes 400 examples around the globe, the Lightning II is by no means sweeping the board in sales terms, and the fighter market appears set to remain vibrant and highly competitive for years to come, until Europe, too, can promote a new class of combat asset.