The New Zealand Defence Force is to buy 11 Beechcraft T-6Cs to meet its requirement for an advanced pilot training capability. The NZ$154 million ($127 million) deal will also include CAE flight simulators, classroom- and computer-based training packages, plus training and maintenance support. 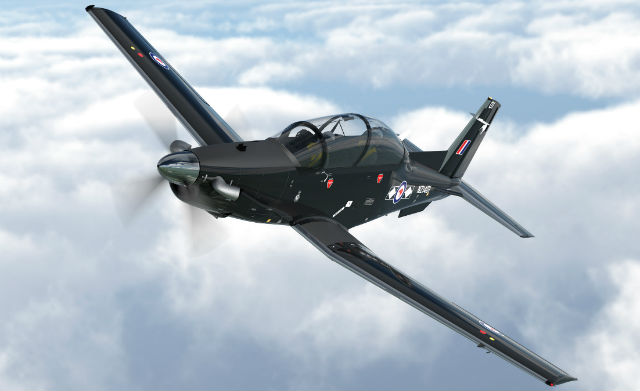 The Pilot Training Capability project was announced in the Defence White Paper 2010. A request for information (RFI) was issued to industry in October 2011, and Beechcraft’s T-6C demonstrator made a tour to New Zealand in 2012, and was used to fly a number of Royal New Zealand Air Force officers. The extent to which other competing aircraft were evaluated is unknown.

At the time of the RFI, the government said that it was open to a purchase or lease, or to contracting a complete pilot training package from a commercial provider.

Under the deal, two simulators will be installed at the air force's Ohakea base and supported by CAE Australia. Also included in a 30-year contract is maintenance support by New Zealand company Safe Air, which will create around 21 new jobs at Ohakea.

The T-6Cs will be operated by 14 Sqn, which previously flew the Aermacchi MB-339CB in the advanced training and light attack roles, until the disbandment of the New Zealand’s air combat force in 2001.

A first batch of four aircraft will be delivered from Wichita, Kansas during November 2014, Beechcraft says, with the rest to follow by mid-2015. Training facilities and simulators should also be in place by the same time, enabling the first qualified flying instructor course to begin.

“The new system is expected to be operational for the first trainee intake in early 2016," Coleman says.

Basic pilot training is currently carried out on the CT-4E, with the type scheduled to reach the end of its service life in 2018. Advanced and twin-engined training is conducted with Beechcraft King Air 200s, which are leased under a contract that will also expire in 2018.