Ilyushin has rolled out the first prototype of the modernised Il-114-300 turboprop, after it was painted ahead of certification flight tests.

The aircraft features a simple livery with the name of the Ilyushin aviation complex on the fuselage and the model designation on the nose, with a Russian flag on the vertical fin.

Ground and flight tests are scheduled to take place this year. 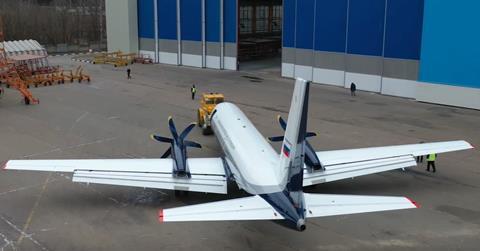 These aircraft will be brought into the test programme at the end of 2020, says Grudinin, and certification will be completed in 2022.

Serial deliveries will then commence from 2023.

Certification is scheduled for 2022

“Painting the aircraft will help us determine the appearance and composition of paint coatings that will be used on serial Il-114-300,” says programme director Maxim Kuzmenko.

“It is extremely important for us that the coating has special protective properties, high weather resistance, strength, and elasticity.”

Initial installation of cockpit equipment and control systems was carried out in November, says the company.

Ilyushin is developing the modernised version of the twin-engined regional aircraft to replace ageing Antonov An-24s.