Alaska Airlines will operate Virgin America’s Airbus A320 family fleet through at least 2024, as it targets a decision on its long-term fleet mix by the end of this year.

Most of the leases on the 63 A319s and A320s in the Virgin America fleet expire by 2024, says Alaska chief financial officer Brandon Pedersen during an investor day presentation today. If these are allowed to expire, the airline will operate just 13 of these aircraft, 10 of which are owned, at the end of the period. 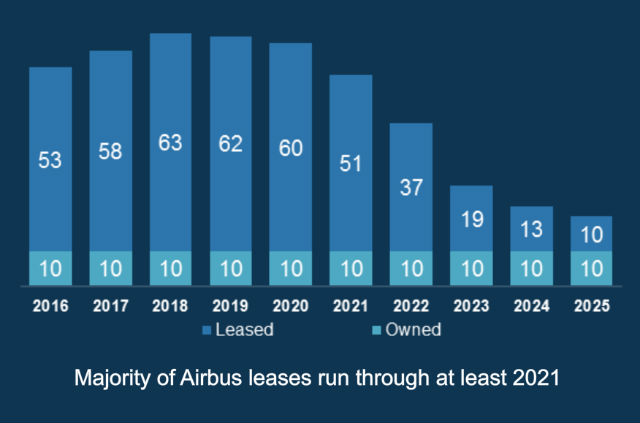 Pedersen’s presentation also shows Alaska taking delivery of all 10 A321neos from lessor GECAS, which will increase its Airbus fleet to 63 by the end of 2018. Five are due this year and five next year.

The Seattle-based carrier will make a decision on whether to keep Virgin America’s order for 30 A320neos and maintain the Airbus fleet beyond 2024 by the end of this year, says Pedersen. The A320neos begin arriving in 2020.

“The Airbus airplanes will be with us for a long time,” he says. “We will be an Airbus customer for the foreseeable future.”

Alaska touted itself as a “proud” all Boeing 737 operator prior to its acquisition of Virgin America.

Alaska is weighing its future fleet size and capital expenditure commitments as part of the Airbus fleet evaluation, says Pedersen. The combined airline will have a minimum of 297 aircraft but could grow to 497 aircraft by 2024 based on its current orderbook and opportunities to extend leases.

Market demand and the decision on the Airbus fleet will be large determinants of the future fleet size, he says.

Alaska is also evaluating its long-term annual aircraft capital expenditure target. The roughly $1.2 billion in 2017 and roughly $1.3 billion in 2018 are largely set, says Pedersen, but beyond that it can adjust the level of investment.

The carrier anticipates $1 billion to $1.3 billion in aircraft capital expenditures in 2019, a number he says will change as it sets an annual target.