American Airlines took delivery of its first owned Embraer 175 aircraft today, the first of 60 aircraft it will add to its regional fleet through 2017.

The aircraft, registered N200NN and MSN 17000456, will be operated by Trans States-subsidiary Compass Airlines beginning in March. It will be used to replace smaller regional jets as American continues renewing its feeder fleet.

“The last few years really have been about restoring American Airlines to greatness and today really is the culmination of a lot of those efforts,” says Kenji Hashimoto, senior vice-president of regional carriers at American, at the handover ceremony in Sao Jose dos Campos, Brazil, today. A “key effort” in that process is fleet renewal, he says.

The 76-seat E175s are replacing small regional aircraft in the Fort Worth, Texas-based carrier’s feeder fleet. It plans to replace one Bombardier Dash 8-100 and 21 Embraer ERJ-140s, with 21 Bombardier CRJ900s and 29 E175s – including N200NN – this year, its latest fleet plan shows.

American will place the first 20 of 60 E175s it has on firm order with Minneapolis-based Compass. The remaining 40 will go to its Envoy subsidiary with deliveries beginning in November.

“I can’t think of two greater partners to represent American Airlines and [its] brand out to our customers -- Embraer and Compass,” says Hashimoto.

The four executives at the delivery ceremony, first four from left to right: Hashimoto, Leach, Warlick and Silva 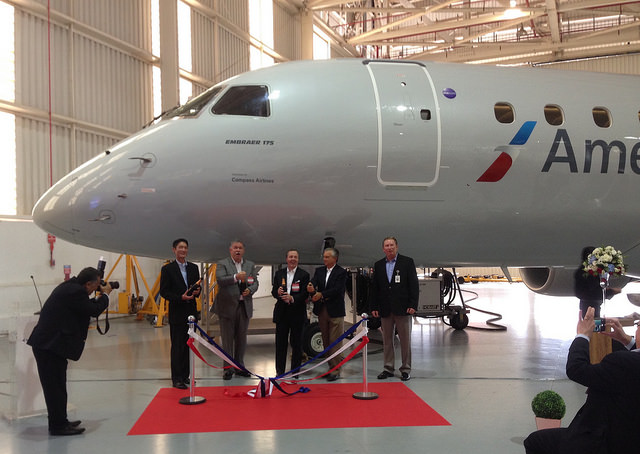 Silva highlights the nearly two-decade relationship between American and Embraer at the ceremony. Citing the order for 50 Embraer ERJ-145s that the carrier placed in 1997 as helping to rejuvenate what he says was then a “broken company”.

The E175 will enter service with Compass on flights to Denver International and Houston Intercontinental airports from Los Angeles International airport on 29 March. Both routes are currently flown on Mesa Airlines-operated Bombardier CRJ900s.

Leach says that all 20 of the E175s at Compass will be based in Los Angeles.

“It builds on a strength we already have [there], it’s a natural transition for us,” he says.

American has 90 options for E175s from its December 2013 order. The airline continues to evaluate its need for regional aircraft, says Warlick, but he declines to comment further on its plans for the options.