American Airlines has set 2019 as the year it will retire its Boeing MD-80 fleet, replacing the venerable rear-engined aircraft with modern Boeing models.

While the MD-80 lacks the storied history and iconic shape of the likes of the retiring Boeing 747, it was a workhorse of American and other US carriers' domestic fleets from the 1980s through the early 2000s making it an everyday sight at airports around the country.

American has said before that the MD-80 would exit its fleet by the end of the decade, but had not publicly stated a firm date until the announcement on 30 October that it will close its St Louis pilots base in September 2018 due to retirements of the aircraft. The St Louis base, which the airline acquired with Trans World Airlines (TWA) in 2001, only includes the MD-80.

All of the carrier's MD-80s will be based at its Dallas/Fort Worth hub once the St Louis pilot base closes.

American was the first major US carrier to commit to the MD-80 – if only tentatively at first – when it agreed to "rent" 20 from McDonnell Douglas in 1982, the Flight International archive shows. The airframer essentially leased the aircraft to the airline under a deal that allowed it to return the aircraft after five years with no penalty, or earlier with a cancellation charge.

Prior to American's rental agreement, AirCal, the first Frontier Airlines, Hawaiian Airlines and Muse Air were the only US carriers operating the MD-80, Fleets Analyzer shows. TWA followed American with an order for 15 of the type later in 1982.

Initially, American planned to primarily use the MD-80 to replace Boeing 727-100s in its fleet, citing 37% better fuel efficiency for the former compared to the latter, the archive shows. However, it instead opted to use the aircraft for growth when it placed what at the time was its largest order ever for 167 MD-80s, including 67 firm and 100 options, in 1984. 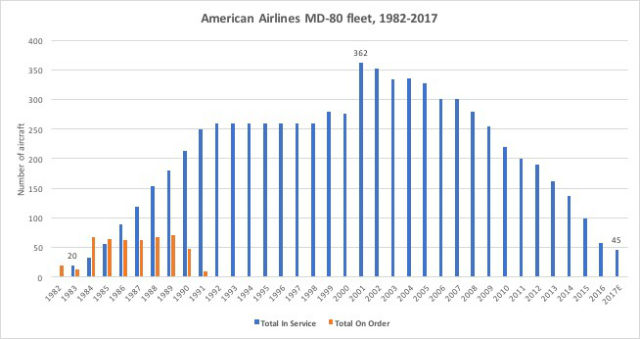 American's MD-80 fleet grew to 260 by 1993, the database shows. The count remained unchanged until 1999 when it increased to 279 following the acquisition of Reno Air, and then jumped to an all-time high of 362 in 2001 following American's merger with TWA.

American operated more than 300 MD-80s through 2007. The fleet has shrunk every year since as aircraft have been retired.