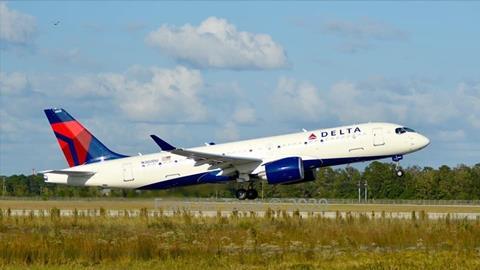 Delta vice-president of fleet, Kristin Bojko says: “These 12 additional A220 aircraft will help power our increasingly streamlined fleet while also providing our customers with the elevated in-flight experience they’ve come to expect from Delta.”

Delta operates its A220-300s in a three-class 130-seat configuration featuring 12 seats in first class, 30 in its Comfort Plus extra-legroom economy offering and 88 in the main cabin.

With the latest order, Delta throws more support behind Airbus, with which the airline has closely aligned in recent years. Delta also holds orders for 134 of the Toulouse airframer’s largest narrowbody – the A321neo.

Delta has, however, recently diversified. In July 2022 it disclosed having ordered 100 Boeing 737 Max 10s. That type, which Boeing aims to have certificated by early 2024, competes most closely with A321neos.