Spanish regional carrier Binter Canarias received its first of two Bombardier CRJ1000s during a ceremony at the airframer’s facility in Mirabel, Canada, on 30 March.

The Canary Islands-based operator says it is planning to use the jets on services to Portugal, Cape Verde and Western Africa, with this first aircraft initially flying routes to Lisbon, Nouakchott, Dakar, Banjul and the island of Sal. 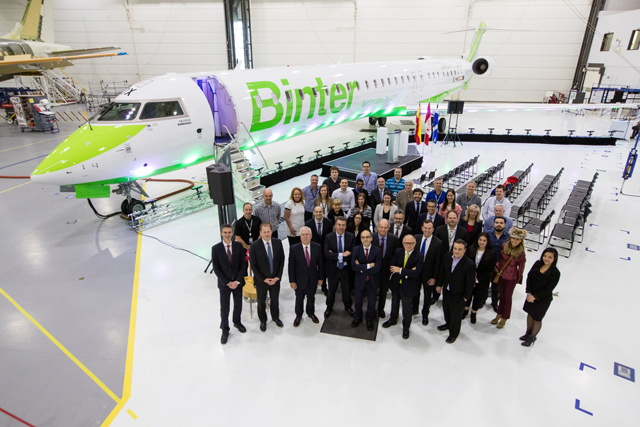 The CRJ1000 has been delivered through a lease agreement with Spanish carrier Air Nostrum, which already leases two CRJ900s to Binter Canarias.

“We are pleased with the performance of the in-service CRJ900 aircraft and we are confident that the CRJ1000 regional aircraft will also be a key asset,” says Pedro Agustin del Castillo, president and chief executive of Binter Canarias.

The carrier says the second CRJ1000 is due to be delivered in May.

Del Castillo told FlightGlobal in October that the airline was aiming to add “three or four” jets to its fleet over the coming two years.

Flight Fleets Analyzer shows that Binter Canarias also operates ATR 72-500s and -600s, with orders for 18 of the latter type placed over the past three years.