Korean Air took delivery of its first Boeing 787-9 today, with its international debut set for Toronto flights from June.

Boeing handed the aircraft (MSN 34810) over to Korean Air chairman YH Cho and president and chief operating officer Walter Cho in a signing ceremony at its North Charleston plant today. 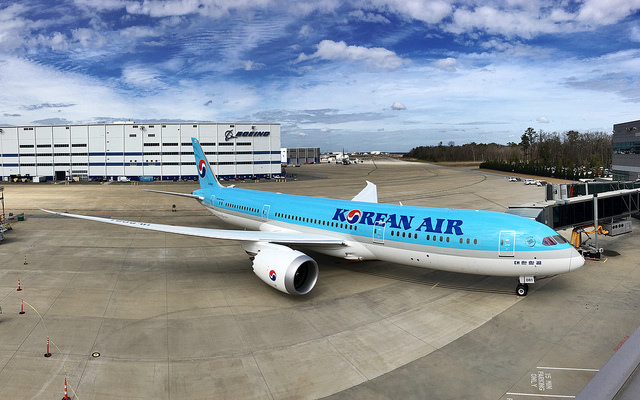 “The 787 Dreamliner will become a key member of Korean Air’s fleet, as we continue to introduce next generation airplanes to our customers,” says Walter Cho at the ceremony.

Korean Air has firm orders for nine more 787-9s that it will take delivery of by 2019, the Flight Fleets Analyzer shows. It has options for 10 more aircraft.

The 787 will enter service with the SkyTeam Alliance carrier three-times daily between Seoul Gimpo and Jeju in April and then shift to international flying with daily service on the Seoul Incheon-Toronto route in June, says Cho during an interview.

Korean Air plans to place the 787 on flights to Barcelona, Los Angeles and Seattle Tacoma as it takes delivery of more aircraft, he says. It does not have a timeline for when 787 flights to those cities will begin.

Madrid and Zurich are also slated for 787 flights, according to a separate statement from the airline.

Boeing plans to deliver five 787-9s to the carrier by the end of 2017, the airframer says.