Qatar Airways has unveiled the cabin interior of its Airbus A380s at the ITB travel trade show in Berlin today, which features a new first-class product. The airline plans to put the superjumbo into service this summer between Doha and London Heathrow.

Qatar Airways chief executive Akbar Al Baker revealed the cabin layout at the show. The airline is configuring its A380s with a three-class, 517-seat layout incorporating first and business class on the upper deck and economy on the upper and main deck. 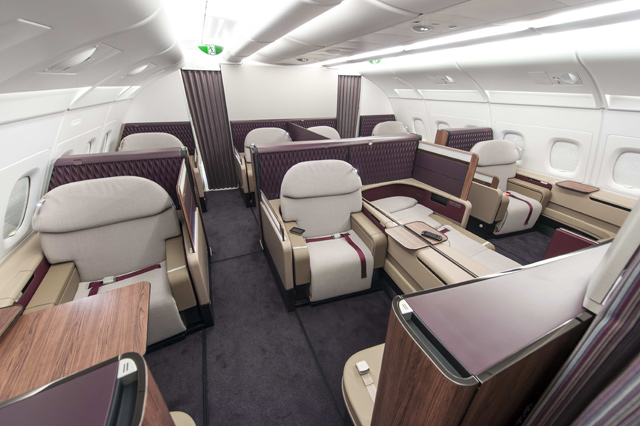 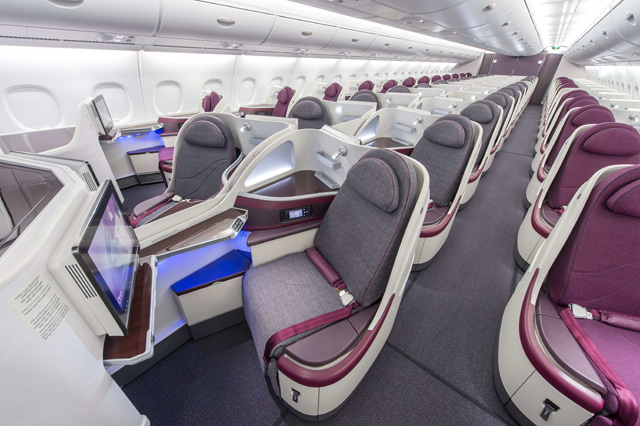 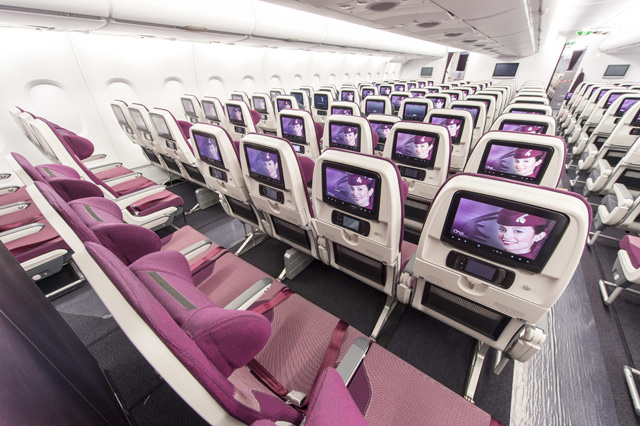 The economy cabin on the main deck has 10-abreast seating

The eight-seat first-class cabin is at the front of the upper deck and features a brand new lie-flat design offering 90in (229cm) pitch and equipped with a 48cm screen. The A380 is expected to be the only aircraft in Qatar’s fleet to feature a first-class cabin once its four A340-600s have been retired.

"It is a landmark moment to see this fantastic new first-class A380 seat displayed here at ITB Berlin, the perfect event at which to announce such important innovations to our global audience," says Al Baker.

The A380’s 48-seat business-class cabin is in a four-abreast layout with seats similar to those on the airline’s Boeing 787s. Again, the seats are a lie-flat design.

The economy cabins occupy the entire main deck and part of the upper deck, comprising 461 seats in total. The main deck incorporates a 10-abreast 3-4-3 layout. The upper-deck economy cabin seats 56 passengers, with the airline's frequent flyers being given priority for these seats.

Qatar Airways is due to take delivery of its first three A380s in June, to coincide with the opening of the new Doha International airport. The delivery of the first two aircraft has been pushed back from April and May to allow the airline to introduce the type when its new hub is operational. The airline has firm orders for 10 A380s and options for three more.

Qatar Airways will bring an A380 to the Farnborough air show in July, where it will also display a Boeing 787-8 and a sharklet-equipped A320. The airline’s line-up will be completed by Airbus displaying an A350-900 in a hybrid scheme featuring Qatar Airways titles.

This story has been updated with revised seat figures for the economy- and business-class sections.