PICTURE: Singapore Airlines takes delivery of its first A350-900

Singapore Airlines has taken delivery of its first Airbus A350-900, with the aircraft ferrying into Singapore Changi airport from Toulouse on 3 March.

The aircraft, bearing registration 9V-SMA (MSN 26), is the first of 67 A350-900s on order, which includes seven ultra-long-range variants.

The A350 features 253 seats in a three-class configuration, comprised of 42 business class, 24 premium economy and 187 economy seats.

Speaking at the delivery ceremony at Changi, Airbus chief executive Fabrice Brégier, says that SIA will received a total of 11 A350-900s by the end of the calendar year. 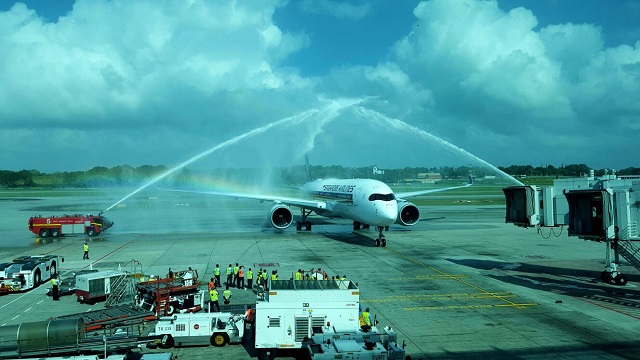 "The addition of the A350-900 exemplifies SIA's longstanding commitment to operate a young and modern fleet," says SIA chief executive Goh Choon Phong.

The airline will operate the aircraft on some services within Asia for crew familiarisation, ahead of its long-haul debut on the Singapore-Amsterdam route on 9 May.

That debut had been initially scheduled for an April start date, but the late delivery of the first aircraft forced the Star Alliance carrier to postpone the switch over from Boeing 777 to A350 operations.

SIA adds that from 2018 it will also start taking delivery of A350s configured for regional routes with a different seating configuration.

On whether the carrier will look to its increase order of seven A350-900ULRs, SIA says that it is "keeping all options open", but adds that "at this point, seven is sufficient".

Flightglobal's Fleets Analyser shows that SIA will take delivery of nine A350-900s in 2018, and that there are now 13 A350s in service with Qatar Airways, Vietnam Airlines and Finnair.