​SIA quietly parks its first A380

Flight Fleets Analyzer shows that 9V-SKA has been parked since 10 June 2017. SIA confirms that the aircraft is "undergoing de-lease work before returning to the lessor."

The aircraft's last commercial service was SQ317, a London Heathrow-Singapore flight on 10 June. It is in a hangar at Singapore Changi Airport.

Fleets Analyzer shows that the lease expiry is on 12 October, at which point it will return to German aircraft investor Dr. Peters Group.

9V-SKA (MSN 3 - pictured below prior to delivery in 2007) became a part of aviation history on 25 October 2007, when it operated the world's first commercial A380 service on the Singapore-Sydney sector. 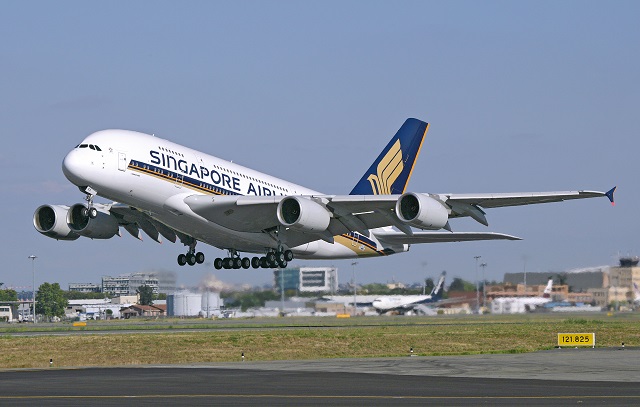 A charity auction was held for seats on the highly-anticipated first flight, with 6,000 aviation enthusiasts bidding for 650 seats – half on the Singapore-Sydney leg, half on the flight back. A total of S$1.9 million ($1.3 million in October 2007 rates) was raised for charity, and the flight was widely covered in international media.

9V-SKA is equipped with 12 first class suites, a revolutionary innovation in 2007. It also seats 60 in business class, 36 in premium economy, and 333 in economy.

FlightGlobal understands that Dr. Peters has been considering parting out the first two A380s due to return from SIA, although it has not made a final decision.

Of its remaining 15 A380s, SIA will submit 14 to retrofit work involving new seats. The number of suites will be halved to six from 12, and be relocated from the lower deck to the upper.

SIA also has orders for five additional examples. These will arrive between October 2017 and May 2018.