United Airlines' final Boeing 747-400 flight arrived in Honolulu at 15:00 local time on 7 November, ending the Queen of the Skies' 47-year run with the carrier.

United's last 747 after its final flight to Honolulu 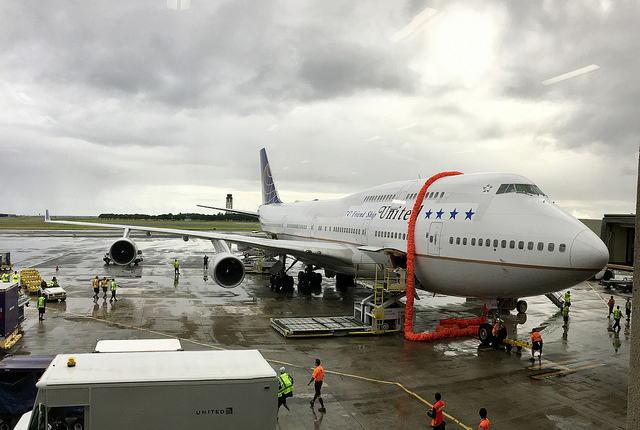 The flight, UA747 operated by N118UA, was a throwback to the 1970s, when United launched its "friend ship" service with the widebody to Hawaii and on transcontinental routes across the USA.

"It is iconic," said Oscar Munoz, chief executive of the Chicago-based carrier, at the send-off party for the final flight in San Francisco. "It is an architectural and mechanical marvel, but I think more importantly it really did open up air travel to so many more people."

United's 747 final flight was not without a hitch. The flight departed San Francisco an hour late at 12:00 local time due to an issue with the jet's air conditioning valves.

The brief maintenance delay was fitting in a way, as the first 747 flight on Pan Am departed New York late due to engine issues on its inaugural sortie to London Heathrow in January 1970.

Captain David Smith, speaking after take off, took the delay lightly, joking that most passengers on the flight likely would not mind if he circled over the Pacific Ocean for several hours.

"As tough as it is to say goodbye to this iconic aircraft today, it's about celebration," said Howard Attarian, senior vice-president of flight operations at United, in a toast onboard. "We're celebrating the 747 and all the wonderful things she has brought to our airline."

United took delivery of its first 747 in June 1970, inaugurating the aircraft on the San Francisco-Honolulu route that July. At its peak, the airline operated 56 of the jumbo jets, before the fleet dwindled to just 20 at the beginning of 2017.

Fellow US carrier Delta Air Lines is scheduled to fly its last 747-400, inherited from Northwest Airlines when the two merged in 2009, from Seoul Incheon to Detroit on 17 December.

United, however, holds the crown for the longest continual 747 operations of any US passenger carrier.