United Airlines is considering the Airbus A330-800neo and Boeing New Mid-market Airplane (NMA) among options to replace its fleet of aging Boeing 757s and 767s.

The Chicago-based carrier is looking at replacements for its 77 757-200 and -300s, and 51 767-300ERs in the near term, a presentation by senior vice-president of finance, procurement and treasurer Gerry Laderman on 27 February shows. 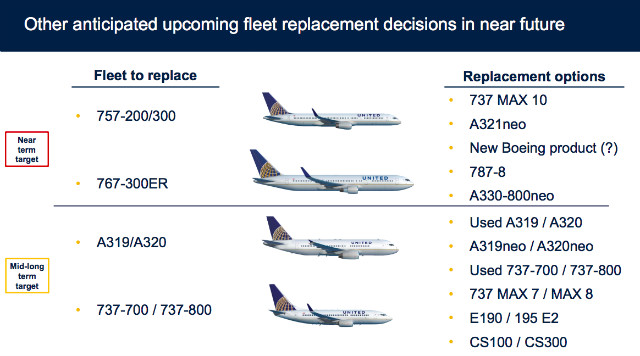 The airline targets an average life for its aircraft of around 25 years, Laderman's presentation shows.

United and other US carriers face a similar quandary over what to replace aging 757s and 767s with. Most domestic 757s have been replaced by A321s and 737-900ERs, but neither Airbus nor Boeing have released a comparably sized replacement for longer missions across the Atlantic or to South America.

However, multiple airlines that have looked at the A321LR say it will not be capable of carrying as high of a payload as the 757 across the Atlantic.

For the 767, airlines have said that the A330neo is too large while the 787-8 has too much range for the specific missions they are looking at. Many 767s fly across the Atlantic on higher density routes than the 757, but also to farther flung points in Europe, South America and even in Asia.

“It’s a great airplane [but] it’s getting a little old and if we’re going to keep flying them longer we’re going to need to make some investments in extending the life,” said Scott Kirby, president of United, on the 767 in January 2017. “But it also serves missions that the other aircraft would be hard-pressed, at least in today’s economics, to find.”

American Airlines chief executive Doug Parker has expressed similar sentiments regarding the future of its fleet of 54 767-300ERs.

Delta Air Lines is also interested in the NMA, with chief executive Ed Bastian reportedly telling employees earlier in February that it hoped to launch the aircraft.

"Delta finds [the NMA] to be an interesting concept and could be a long-term replacement for some 757s and 767s," the Atlanta-based carrier told FlightGlobal at the time.

The carrier is considering used models of both aircraft families, as well as the A320neo family, 737 Max family, Bombardier CSeries and Embraer 195-E2 as possible replacements.