Airbus is literally driving ahead with its e-Fan all-electric trainer project – unveiling at the Paris air show a full-scale mockup of the production “2.0” model that screams of automotive design influence in its sculpted fuselage and sportscar-style cockpit.

Group chief technology officer Jean Botti (pictured left) and e-fan chief designer Bruno Saint-Jalmes (right) both trace their roots to careers at Renault – and for Botti to General Motors. But the e-Fan is no flying car; the battery-powered twin-fan packs a 137kg (302lb) of lithium-polymer batteries to generate 60kW for its two motors, and the prototype will later this summer attempt to cross the English Channel from Lydd to Calais, reversing Blériot's historic feat. 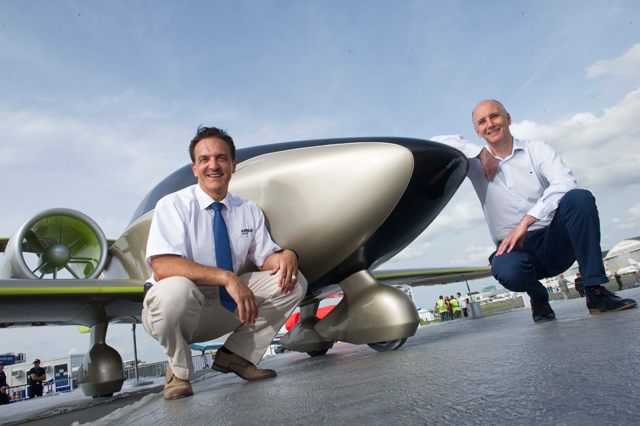 Saint-Jalmes says the 2.0's “character line” along the fuselage is a first in aircraft styling. And, he adds, the black nose and windscreen follows another motor industry practice, emphasising an emerging Airbus “family look”, of the “black glasses” on the A350 airliner and H160 helicopter – which he also designed.

Saint-Jalmes also oversaw design of the 2.0's integrated cockpit, which is on display in the Airbus innovations chalet – and, with its hand-stitched leather buckets, also looks like it belongs in a high-end sports car.

But there's more to e-Fan than aesthetics. The “instrument panel” makes a modern glass cockpit look like dials maze of a 1960s fighter jet – two Microsoft Surface tablets click into the dashboard, allowing pilot and instructor to work together inside and outside the aircraft, before, during and after flight.

The goal, says Botti, is for today's smartphone-saavy youth to find e-Fan quick, fast and easy: “We are preparing the aviation of tomorrow. It's a new way of flying.”