Bell Helicopter arrives at Paris confident that production of the V-22 Osprey tiltrotor will extend well into the mid-2020s, despite output falling this year to 21 aircraft from 2014’s high of 37 units.

Produced in partnership with Boeing, the Osprey has so far secured only the US Marine Corps and US Air Force as customers. The programme entered into its second multi-year contract with Washington late last year, guaranteeing production until 2020.

However, Bell chief executive John Garrison believes further domestic deals – the US Navy says it intends to procure up to 44 V-22s for its carrier onboard delivery (COD) requirement – allied to export orders, will secure the programme well into the middle of next decade.

The COD order, “which would be contracted in the next 18 months”, and see deliveries in the 2020-21 timeframe, could form the backbone of a third US multi-year deal, says Garrison.

Japan is likely to be the initial overseas customer, and is hoping to acquire up to 17 of the tilitrotors via the foreign military sales route.

Garrison says he anticipates finalising the contract with Tokyo “sometime this year”. Other countries are “evaluating” the V-22, he says, although declines to be drawn on whether it is offering the type to Singapore for its ongoing effort to replace its aged fleet of 32 Airbus Helicopters AS332/532 Super Puma/Cougar types. 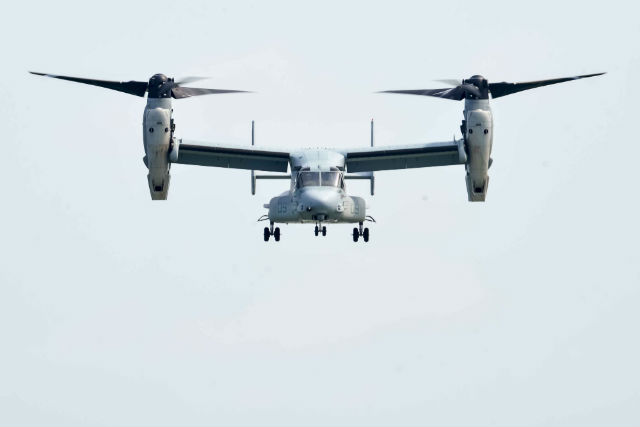 Israel, however, which had previously expressed its intention to buy V-22s, has “delayed” any acquisition due to internal political issues, “but I don’t know for how long”, says Garrison.

Meanwhile, the airframer continues work on the next-generation V-280 Valor tiltrotor that it is producing in partnership with Lockheed Martin for the US Army’s joint multi-role technology demonstrator (JMR-TD) programme.

Long lead items for the first flying prototype are being manufactured, with final assembly due to begin in October at Bell’s Amarillo, Texas facility. First flight is scheduled for late 2017.

“The programme is proceeding quite nicely and is on schedule with our plans,” says Garrison.

It passed the critical design review milestone in July last year, he says, and development work continues on the control logic for the Valor’s new fly-by-wire control system.

Despite worries that US defence budget cuts could mean that JMR-TD will not lead to an eventual production contract, Garrison remains upbeat and suggests the Department of Defense could even “accelerate the acquisition process” if it sees that “the technology is ready and available”.