Following its formal handover to Brazil on 16 June, the first search and rescue-configured Airbus Defence & Space C295 is making its debut at the show, ahead of a planned delivery flight that will see it touch down in over 12 different countries to demonstrate the capability of the type.

Adorned with orange SAR markings, the aircraft is being displayed in Paris for the duration of the show, after which it will return to Airbus’ Seville plant to prepare the aircraft for its world tour that will commence at the end of June and conclude at the beginning of August. 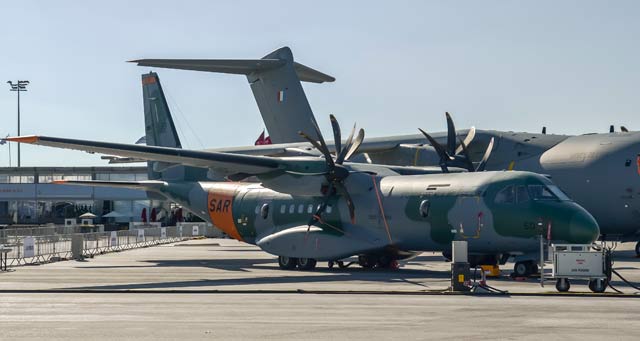 The demonstration/delivery tour will be co-crewed by Airbus and Brazilian personnel, and will see the aircraft visit undisclosed countries in North Africa, the Middle East and Eastern Asia, before heading to the Aleutian Islands in the northern Pacific Ocean, Anchorage in Alaska, US, then to Canada, other US locations, Mexico and South America. It will then land at Campo Grande international airport in Brazil ahead of entering service with the air force.

This is the first of two SAR-configured examples that will be delivered to the Brazilian air force – originally three were ordered, but this was later modified to two - under a deal signed in 2014. It will be integrated with Airbus’ Fully Integrated Mission System that includes a touchscreen suite, and will join the 12 transport variants of the C295 that Brazil already operates.

The aircraft was accepted by Brazilian defence minister Raul Belens Jungmann in Seville on 16 June, and flew to Paris the following day ahead of appearing at the show.

Canada is also set to receive 16 C295 for SAR operations following a win in 2016, which will see it replace the de Havilland Canada CC-155 Buffalo and Lockheed Martin CC-130H Hercules currently in service.